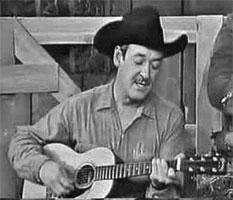 A top session man -- particularly in association with Marty Robbins, with whom he worked and performed for many years, guitarist/singer Bobby Sykes also enjoyed a recording career of his own on labels such as RCA-Victor, Sims, and Starday during the 1960s. Sykes was already a member of Robbins' band, and Robbins had enjoyed a string of hits in country and rock & roll, and one Western hit, "The Hanging Tree," when Sykes and singer/guitarist and session man Jim Glaser suggested that he record a complete album of Western songs. The result was Gunfighter Ballads and Trail Songs and its follow-up, which opened up a whole new and very fertile field of music for Robbins and hundreds of other country performers in the decades to come.
Sykes and Robbins were thick as thieves where music and politics were concerned. In 1964, Robbins wrote a pair of topical songs, "Ain't I Right" and "My Own Native Land," attacking Communist sympathizers and antiwar protesters and implicitly supporting the presidential candidacy of Barry Goldwater that year. Columbia was afraid of the potential political repercussions of Robbins releasing the songs, and instead Sykes recorded them for the Sims label -- using the alias "Johnny Freedom" -- in a voice so similar to Robbins that for many years the single was mistaken for a Marty Robbins release.
Sykes' own singles on the Jed and Dollie labels during the late '50s and '60s included the ballads "A Touch of Loving" and "Until You're in My Arms" and the classic "Diesel Smoke and Dangerous Curves," a favorite pick of car- and truck-song compilers and country music enthusiasts. He also recorded for Starday, including "Place for Girls Like You," which opens up the multi-artist compilation The Wonderful World of Country Music, released in the mid-'70s. Additionally, Sykes also recorded a dozen or more country numbers for RCA through Reader's Digest for that publisher's Country and Western Jamboree series, six songs in collaboration with singer Lou Darnell and six more solo, with songwriters ranging from Pete Seeger ("On Top of Old Smokey"), Pee Wee King ("Bonaparte's Retreat"), and Jimmie Rodgers ("In The Jailhouse Now") to Hank Williams ("Your Cheatin' Heart"), Jimmie Davis ("You Are My Sunshine"), and Floyd Tillman ("I Love You So Much It Hurts"). His most visible work, however, remains the playing and singing he did on numerous Marty Robbins singles and albums, and their CD reissues.