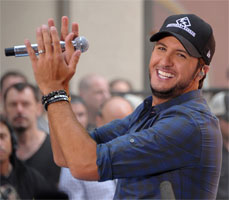 Bronwood, Georgia's Cole Swindell is a country singer and songwriter who often adds touches of rock, pop, and hip-hop to his songs. Swindell was a member of the same Sigma Chi fraternity at Georgia Southern University as fellow Georgian Luke Bryan; the two often played shows together, and after Bryan made his move to Nashville, Swindell followed. Six of the songs on Bryan's Spring Break... Here to Party album were written by Swindell; he also contributed songs to albums by Scotty McCreery, Chris Young, and Florida Georgia Line. Swindell's success as a songwriter opened up an opportunity to pursue a career as a performer. Swindell released the single "Chillin' It" independently in 2013, and it generated enough attention to get the singer signed to Warner Nashville by the end of the year. Warner Nashville re-released the single and it hit number one on the Billboard Country chart on its way to an eventual gold certification.
Swindell released his self-titled debut on February 18, 2014. It debuted at number three on the Billboard 200 and produced two more Top Ten Country singles, "Hope You Get Lonely Tonight" and "Ain't Worth the Whiskey." By the end of 2014, Swindell had dropped an EP for Warner Bros., The Down Home Sessions, which was released in conjunction with his first headlining tour. In 2015, Swindell was touring with Jason Aldean and preparing a new release, but Swindell's debut album hadn't stopped spawning hits, and another track from the full-length, "Let Me See Ya, Girl," broke out and rose to number two on the Country Airplay chart. As "Let Me See Ya, Girl" was continuing to dominate country radio, Swindell released another EP, The Down Home Sessions II, in November 2015. "You Should Be Here," the first single from his second album, reached number one on Billboard's Hot Country charts prior to the release of the full-length You Should Be Here in May of 2016.