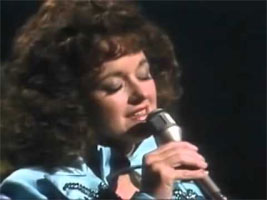 The multi-talented Margo Smith started out as a kindergarten teacher who sang folk and country songs to her students; she frequently wrote the songs herself. Smith moved to singing at PTA meetings and later on radio broadcasts. She developed a following, cut a demo and signed to 20th Century Fox Records in 1975, where she had a major hit with her own "There I Said It." Her second single, "Paper Lovin'," made the Top 30, and she recorded an album. Unfortunately, the label soon folded its Nashville division and she was cut free. She signed with Warner Brothers the following year and had three Top Ten singles through 1977, including "Take My Breath Away" and her first number one, "Don't Break the Heart That Loves You." The following year, she had another chart-topper with "It Only Hurts for a Little While," and the follow-up "Little Things Mean a Lot" was another major hit. She and producer Norro Wilson duetted as Margo & Norro for "So Close Again," which reached the middle of the charts. Through the end of the decade, Smith toured heavily with her band Night Flight, opening for such artists as Conway Twitty, Tammy Wynette, Kenny Rogers and Charley Pride. In 1979, Smith had two major hits and decided to affect a sexier image, appearing in only a satin robe on the cover of her album Just Margo. She had three more hits that year, including "Cup of Tea," a duet with Rex Allen, Jr.
In the early '80s, Smith reverted to her previous wholesome image. She moved to the AMI label in 1982, but had no chart singles. She continued label-hopping through 1985 with only one minor hit, "Everyday People," a duet with Tom Grant. That year, she recorded The Best of the Tennessee Yodeler, a tribute to yodeler Bonnie Lou, and sold it on television. Smith then recorded for Cammeron Records, a label created by her manager, but had no chart hits until 1988 with another minor entry, "Echo Me." During the '80s, she acted on TNN's I-40 Paradise. She and her daughter formed a gospel duo; as Margo Smith & Holly, they recorded for Homeland Records and found success on contemporary Christian radio.