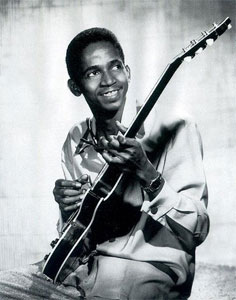 Fie on these large-scale music industry conferences: many essential research assistants get lost at them. At least the heretofore faithful Igor had the sense of mind to leave the following dispatch on an office answering machine prior to blowing off like a geyser: "Heard what sounds like the new Jimi Hendrix here at 'South By,'" his rant started, revealing his natural ability to quickly pick up on the native jargon. "He has a cute face, has a great personality, but one song that could be a hit seems to unfortunately be about drugs." Igor proceeded to sign off, not with his own signature but with the name of the artist he had seen performing, Ray Sharpe. As is unfortunately the case with research, faulty assumptions had been made with much less than all the facts in evidence. This artist's youthful appearance makes him seem like a newcomer circa 2007 but he is not. The previously mentioned song had already been a hit in 1959. Way back then, a "fatty" was an obese person, not a drug reference, in this case part of a lyric about a gal named "Linda Lu."
This big "hootchie mama," as she might have also been called, has a connection with other illustrious females of song, including the mysterious Phaedra as well as the b-word who wants to walk all over you with her boots. The link is the producer of all these sides, Lee Hazlewood, who before linking with Nancy Sinatra took a liking to Sharpe. The end of the '50s was a time of popularity for similarly twangy rock guitarists such as Duane Eddy, who along with studio pro Al Casey also picked on the original "Linda Lu." Name-dropping in the Sharpe saga also includes the actual Jimi Hendrix, involved in a Sharpe session in which guitar duties were wisely turned his way, as well as saxophonist King Curtis, producer of said sides. Sharpe's own abilities have led to others comparing him to Hendrix, that is others besides the missing research assistant whose last such duly noted "sounds like Hendrix" comment was in reference to the initial stirrings of a freshly revived ghoul.
The search for such a sound in Sharpe's discography could be frustrating. The 1995 Bear Family collection entitled Linda Lu instead favors twang, tinny at that, which in terms of meat content parallels the relationship between an untouched roast and a marrow socket sucked dry. The difference between Sharpe's recorded and live guitar sound has nothing to do with his amazing versatility, however, a fact that is evident on recordings where his range of material even includes a more than competent reading of one of the songs from the Broadway show My Fair Lady. Sharpe hails from Fort Worth, growing up in an environment where country & western became as important to him as blues. He has actually been praised for sounding "white," a reverse of normal racial relations involving R&B vocal performances. Perhaps this was not an asset after all, since none of his follow-ups to the song about the chubby gal enjoyed anything near as appetizing a meal on the hit parade, not even the 1966 sides with Hendrix involved.
"Oh My Baby's Gone" is another of this artist's original songs, the title expressing a not so surprising development when someone is singing about their paramour's weight problem, even on a hit. He has remained busy on the Texas music scene, where reliance on the network of gigs within one's home state is still no way to avoid long drives. Sharpe pitches in guitar duties on recordings by younger artists such as Dave Millsap and is sometimes promoted as the leading, even the only, "black rockabilly artist." Which may explain this latest dispatch from the missing assistant: "Am on my way to Black Rock. To find black rockabilly."