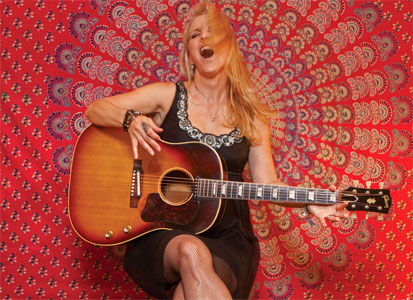 Born in California, USA. Selis grew up in the San Diego region and as a youngster began performing in her local church band, all the while dreaming of becoming a rock star. After an abortive spell at university studying musical theatre and English, Selis began performing on the local bar band circuit but was forced to hold down a number of day jobs while she pursued her dream. At the start of the 90s she teamed up with guitarist and songwriter Marc ‘Twang’ Intravaia in King’s Road, assuming the lead vocalist position. Selis toured and recorded with this highly fêted unit, but despite modest local success the band failed to make much of a national impact.
Selis continued to work with Intravaia when she branched out as a solo artist in the late 90s, making her debut in 1998 with Out On A Wire. This rollicking blend of pop, rock and country went some way to confirming Selis’ claim to be ‘the Queen of Roadhouse Rock’, although the album struggled to match the intensity of the singer’s live shows. She boosted sales for the follow-up, Long Road Home, by promoting her music vigorously on the Internet, most notably on the download site MP3.com. The album was showered with praise by the critics, as was the 2002 follow-up Do You Know Me, but despite her prominent presence on the Internet Selis remained largely unheralded outside the San Diego region. Her fourth album, Nothing But The Truth, featured terrific readings of Kim Richey’s ‘Those Words We Said’ and Tom Petty’s ‘Room At The Top’, alongside a number of swaggering Selis/Intravaia originals.