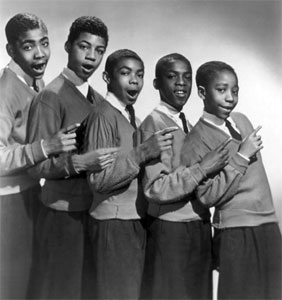 The Schoolboys sound almost uncannily similar to Frankie Lymon & the Teenagers, but they predate them by close to a year in terms of recording and success. Formed in Harlem's Cooper Junior High School in 1954 or early 1955, with Harold Atley as leader, James Edwards (first tenor), Roger Hayes(second tenor), James "Charlie" McKay (baritone), and Renaldo Gamble (bass), they performed in school talent shows and became popular locally, only to see Atley exit after a few months. He was replaced by Leslie Martin, a boy soprano who had an almost operatic intensity to his singing and intonation. They appeared on Ted Mack's Original Amateur Hour and won first prize, which brought them the chance to record soon after, under the aegis of disc jockey Tommy Smalls, who had the popular Dr. Jive Show on WWRL in New York -- he gave them the name the Schoolboys and got them their recording. Their debut single, "Please Say You Want Me," a slow, moon/June-rhymed ballad featuring Martin's astonishingly powerful boy soprano voice, became a hit in the fall of 1955 and led to a series of releases, notable for the pleading nature of their lyrics, especially the ballads, which were usually backed by songs titled with girls' names. The group was never able to match the success of its debut release, however, and by 1956, the Teenagers Featuring Frankie Lymon, also organized in upper Manhattan, had supplanted them in the minds of the listening public.
The Schoolboys' original lineup disintegrated not too long after their one hit -- Renaldo Gamble joined Pearl McKinnon (herself a Frankie Lymon sound-alike) and the Kodaks. By 1957, the Schoolboys were history, their moment having passed to Lymon and company. It is alleged that some of the work credited to the group was really Martin and members of the Cadillacs, rather than his own group.