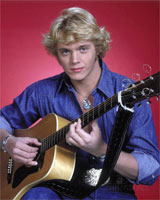 Best known for playing Bo Duke on the hit TV series The Dukes of Hazzard, John Schneider also maintained a parallel secondary career as a country singer for much of the '80s. Born in Mt. Kisco, New York, in 1960, Schneider grew up in Atlanta and started acting at the age of eight; he also learned guitar, and as a teenager he entertained at parties and other social events. He loved auto racing and briefly attempted to become a professional, and that experience helped him land his co-starring role on The Dukes of Hazzard in 1979. He remained with the series until its cancellation in 1985, with a brief interruption due to a contract walkout in 1982, and also appeared in several films and TV movies.
Meanwhile, Schneider recorded a country album called Now or Never for Scotti Brothers in 1981. It was a Top Ten hit on the country charts, and the single "It's Now or Never" made the Top Five on both the country and adult contemporary charts, just missing the pop Top Ten. The holiday album White Christmas followed, and Schneider went on to sign with MCA, issuing five albums from 1984-1987. He scored four number one singles during that time: "I've Been Around Enough to Know" (1984), "Country Girls" (1985), and "What's a Memory Like You (Doing in a Love Like This)" and "You're the Last Thing I Needed Tonight" (both 1986). He also managed five other Top Ten hits, and one of his LPs, 1986's A Memory Like You, topped the country charts.
Schneider kept his acting career going with a variety of guest starring roles on television, plus a few films, and appeared in a couple of Dukes of Hazzard reunion projects. He returned to the spotlight in 2001, when he landed the role of Clark Kent's father on the popular WB series Smallville. From that point forward, Schneider worked regularly on film and television, including providing voices for animated series. He resumed his recording career in a low-key fashion in 2009 with the self-released John's Acoustic Christmas, which was followed by another holiday album in 2014: a collaboration with his Dukes of Hazzard costar Tom Wopat called Home for Christmas. Schneider signed with Maven Music in 2016, releasing Ruffled Skirts, which featured Cajun Navy as support, that year. In 2018, Schneider released Odyssey, an ambitious 52-song exploration of American roots music.