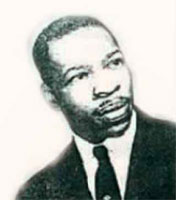 Clarence Samuels was born October 30, 1923 in Baton Rouge, LA where he first sang with his father's group.
By the mid 40s he worked with Roy Brown and made his first recordings for Aristocrat (Chicago, Il) in 1947 and 1948. While performing all around the country he made records everywhere : Swingtime/Downbeat (Los Angeles), Freedom (Houston) and DeLuxe (New Orleans) by the fall of th 40s, Bay'ou Records, Lamp (New York City) Excello (Nashville) and Apt in the 50s. Sharon (New York, 1963) He recorded for small Texan labels, like the Nopal label in 1966, while he was living in Houston. He then stopped recording when he moved to Orlando, Florida where he got involved with booking bands and by 1973 was producing records for Jimmy Liggins' Duplex label. After leaving the music business he moved to Los Angeles again and didn't record new material until 2000.