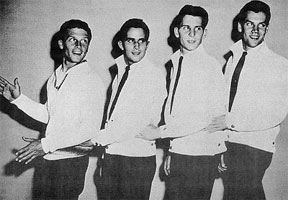 Led by Jimmy Stephens, the light-singing Safaris hit the first time out with "Image of a Girl" (number seven Billboard) in 1960 on Eldo Records, but the So Cal based group never had another one. The calypso-ish, amateurish "Girl With the Story in Her Eyes" looked promising before it withered off the map. And "In the Still of the Night" and "Soldier of Fortune" (1961 releases) didn't attract any attention. Severing their ties with Eldo, the Safaris released "Legion of the Lost" in 1961 on Image Records. It was promptly lost in space as far as record buyers and DJs mattered. Late that same year, a final single by them came out, not as the Safaris, but as the Suddens. "Childish Ways" b/w "Garden of Love," which also served as the B-Side of "Legion of the Lost," dropped on Sudden Records and reached obscurity faster than a computer purchase. A remake of "Image of a Girl" provided Mark Wynter with a number 11 hit in the U.K. in 1962. After maybe two years of recording, the Safaris/Suddens became chapter members of the where are they now club society. "Girl With the Story..." is a popular item among oldie collectors.