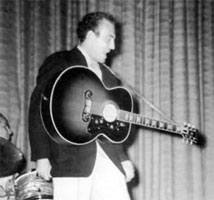 Texas songwriter, singer, DJ, television host, and concert promoter Glenn Reeves' main claim to fame these days is being the first singer to demo Mae Axton and Tommy Durden's “Heartbreak Hotel” in the late 1950s. Reeves' imitated the then-emerging Elvis Presley's vocal style on the demo, and when Presley tracked the song for RCA Victor, he followed Reeves' phrasing note for note, thus imitating Reeves imitating himself: Presley's version of “Heartbreak Hotel” became his first number one hit in 1956. Born December 29, 1932 in northwest Texas, Reeves played trumpet as a child and sang in church choirs. He studied for a time at the University of Houston before serving in the Korean War, and following his military service, got a job as a radio moderator with KCTX in his home state. He also pursued a singing career, and released eight singles total on the TNT, Republic, Atco, Decca, and Envy imprints in the late '50s and early '60s, and also tracked song demos, including “Heartbreak Hotel,” which was never actually released in any form under Reeves' name during his lifetime. None of Reeves' singles found much commercial success, and he began instead to concentrate on his radio and television career, hosting his own variety TV show, The Glenn Reeves Show out of Jacksonville, FL, into the early '60s. He also began working as a show and concert promoter in the Jacksonville area and was extremely successful at it until his death in 1999. Bear Family Records released Reeves' entire recorded output -- all of his singles and demos, some two-dozen tracks in all -- on a single disc under the title Johnny on the Spot: Gonna Shake This Shack Tonight in 2011.