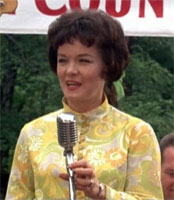 Apart from her solo career, singer Bonnie Owens is well known for the work she did with her former husbands, Buck Owens and Merle Haggard. Born Bonnie Campbell on October 1, 1929, in Oklahoma City to a pair of sharecroppers and one of eight children, she first met Buck in the mid-'40s when he had a local daily 15-minute radio show. Once Buck discovered that Bonnie could sing, he helped her get a job with him on another radio show in 1947. The following January, Buck and Bonnie married, but the union was short-lived. By 1951, after giving birth to two sons, the marriage was over. Since neither could afford a divorce, they stayed legally married, but separated, for several years. Bonnie and the two boys left for Bakersfield, where she worked as a cocktail waitress. It was during this period that Bonnie met Fuzzy Owen and guitarist Roy Nichols, who would be instrumental in the career of Haggard.
By the late '50s Bonnie was recording on the Mar-Vel label with Fuzzy and his band, the Sun Valley Playboys. She cut a well-received duet album with Fuzzy, her sometime boyfriend, on Tally Records, which would later be re-released on Capitol Records as "Just Between the Two of Us." In 1961, Bonnie saw Haggard singing for the first time at a Lefty Frizzell concert. At the time, Haggard was just a few months out of San Quentin prison for breaking and entering. By 1964 Fuzzy was managing Haggard and suggested that Bonnie and Haggard re-record "Just Between the Two of Us." Taking Fuzzy's advice paid off; the song hit the top of the country charts but not for long. It was replaced by "(My Friends Are Gonna Be) Strangers," Haggard's breakthrough single.
In 1965 Haggard signed with Capitol Records, married Bonnie, and signed the Strangers (including Bonnie) with a booking agency owned in part by Buck. Bonnie's marriage to Haggard lasted until 1978, but the two had already separated in 1975. Eventually Bonnie resumed touring with the Strangers in the late '70s and remarried for the final time to Fred McMillenher. She continued to tour regularly with Haggard and the Strangers. While Bonnie released half a dozen albums and numerous singles on Capitol Records in the mid- to late '60s, she remained satisfied singing backup as a member of the Strangers.