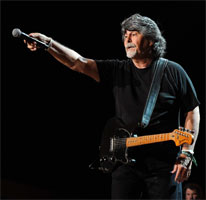 Singer, guitarist, and songwriter Randy Owen is best known for being the lead singer in Alabama, the most successful group in the history of country music. Born on December 14, 1949, Owen and his cousin, Teddy Gentry, grew up on cotton farms on Lookout Mountain in Alabama, sharing a passion for singing and guitar. The duo played in a number of different bands during the '60s, teaming with another cousin, Jeff Cook, in high school to form Young Country in 1969. The band dissolved when Owen and Cook went off to college, but re-formed after they graduated. In 1972 they changed their name to Wildcountry and added drummer Bennet Vartanian, the first of several drummers in the band before Rick Scott took over the chair in 1974. Wildcountry changed their name to Alabama and signed a one-record contract with GRT in 1977, a contract that, thanks to an almost hidden clause, prevented the group from recording with another label after the GRT imprint folded. By 1979 the group was finally able to record again, but Scott opted out and was replaced by Mark Herndon, a former rock drummer whose harder approach was the last key to Alabama's signature sound. Following a self-released album and a pair of impressive independent singles, Alabama signed with RCA Records in 1980, releasing the single "Tennessee River" later that same year, jump-starting a career that resulted in 21 gold, platinum, and multi-platinum albums; 42 number one singles; eight country music Entertainer of the Year honors; two Grammys; two People's Choice Awards; and their very own star on the Hollywood Walk of Fame before the group finally called it quits in 2003. Owen, by now a successful rancher, tested the waters for a solo career in 2008 when he released the album One on One, produced by John Rich of Big & Rich fame, on Broken Bow Records.