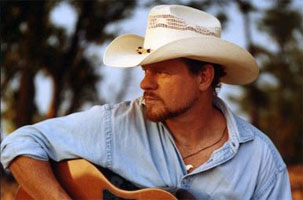 Paul Overstreet was one of the most successful songwriters in contemporary country music, penning hits for artists like George Jones, Randy Travis, Tanya Tucker, and Marie Osmond, as well as scoring hits on his own. He wrote his first songs as a boy in Newton, Mississippi. In 1973, he graduated from high school and headed for Nashville, where he played in country bands at night and worked blue-collar jobs during the day. Despite his efforts, Overstreet couldn't break into the industry.
Eventually, his songs were being recorded by other, more established artists. In 1982, his "Same Ole Me" was recorded by George Jones, who took the song to number five. That same year, Overstreet had his first charting single, when "Beautiful Baby" climbed to number 76. Three years later, the Forrester Sisters took his "I Fell in Love Again Last Night" -- which he co-wrote with Thom Schuyler -- to number one. Later in 1985, Randy Travis had hits with two Overstreet compositions -- "On the Other Hand" (which was co-written with Don Schlitz) and "Diggin' Up Bones," the singer's first number one hit. Tanya Tucker, Marie Osmond, and Paul Davis also had success with Overstreet songs that year.
Overstreet became a full-fledged recording artist in 1986 when he teamed up with Schuyler and Fred Knobloch to form SKO, which scored a number one hit with "Baby's Got a New Baby." In 1987, Overstreet scored one of his biggest songwriting hits when he provided Randy Travis with "Forever and Ever, Amen." As his string of hits for other artists continued, Overstreet released his 1989 debut album, Sowin' Love, which made it to the Top 40 and produced a few hits. His second album, Heroes, came out in 1991 and stayed on the charts for nearly a year. When his third album, 1992's Love Is Strong, was a commercial disappointment, Overstreet shifted his focus to writing more religious material and began recording with Susie Luchsinger, the sister of Reba McEntire. The Overstreet LP Time was released in February 1996. Living by the Book and the holiday album Christmas: My Favorite Time of the Year appeared five years later, followed by Forever and Ever Amen in 2005 and Something for the Road in 2008.