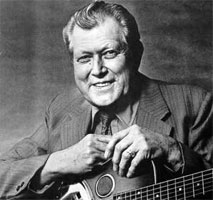 For nearly 60 years, Bashful Brother Oswald was one of the most influential and talented dobro players in country music. For the majority of his career, he was the dobroist for Roy Acuff's Smoky Mountain Boys, becoming the leading dobroist in country as well as one of the most popular members of the band. Over the course of his career, Oswald released only a handful of solo recordings, but left behind enough music to illustrate why he was one of the most influential players of his era.
Bashful Brother Oswald (born Beecher Ray Kirby) was the son of an Appalachian musician. As a child, he learned how to play dobro and banjo, as well as sing gospel music. When he was a teenager, he began playing square dances with various country groups. In the late '20s, Oswald moved to Flint, Michigan, to work in a Buick factory. After the Great Depression hit, he lost his job and became a musician at the radio station WFDF. Because Hawaiian music was very popular, the station manager decided to feature it prominently during regular programming, thus inspiring Oswald to buy his first steel guitar. In 1933, he performed at the Chicago World's Fair and found himself greatly influenced by the wide variety of music he heard there. The following year, he went to Knoxville and began playing dobro with several different bands, including Acuff's Crazy Tennesseans. Oswald became a permanent member of Acuff's band after the singer was invited to join the Grand Ole Opry in the late '30s.
As a Vocalsist, Oswald gained recognition for singing a few lines on Acuff's classic "Precious Jewel" (1940) and on "Wreck on the Highway" (1942).  named his sideman "Brother Oswald" in a ruse to convince audiences that he was the brother of the band's singer, Rachel Veach, to obscure the fact that Veach was an unmarried woman. The dobroist happly complied in creating the Oswald character, and began wearing a floppy mountain hat, tattered overalls, and enormous shoes while adopting a braying horse laugh. The cartoonish character became a favorite of audiences immediately, and it stayed popular throughout his career.
Oswald continued performing and recording with Acuff until the '80s, but began a solo career in the '60s. After working as a session musician, he released a few albums of his own, beginning with 1962's Bashful Brother Oswald. In the early '70s, the Nitty Gritty Dirt Band had Oswald perform on their 1972 hit album, Will the Circle Be Unbroken. Also in 1972, guitarist and dobro player Tut Taylor produced Oswald's Brother Oswald album. In the late '70s, he began playing in the Opryland theme park with former Smoky Mountain bandmate Charlie Collins. During the 1980s, Oswald continued performing with Collins at the Opryland and Acuff at the Opry. Following Acuff's death in 1992, he and Collins earned a regular slot on the Opry's main stage. Oswald died ten years later.