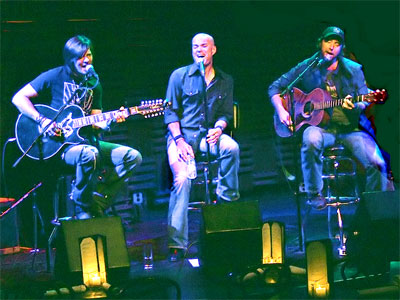 A country-rock harmony trio in the tradition of the Eagles, Poco, and Crosby, Stills & Nash, with a little Alabama and the Beach Boys thrown in for good measure, Nashville-based One Flew South actually have their origins in New York City when El Paso-born Royal Reed and New Orleans-born Chris Roberts met while appearing in the Broadway musical The Civil War in 1998. Also appearing in the production was country Vocals legend Larry Gatlin, who became a mentor to Roberts and Reed and suggested they expand to a trio. Enter South Carolina-born singer and songwriter Eddie Bush, and One Flew South became official in 2005. The trio recorded some demos and shopped them to Decca Records, who quickly signed One Flew South and put them in the studio with producer Marcus Hummon and a crack session band. The resulting debut album, Last of the Good Guys, was released by Decca in 2008.