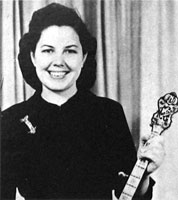 A pioneering vocalist whose soulful, gut-wrenching performances helped redefine the role of the female country solo artist, Molly O'Day's career was relatively brief, but her lasting influence has proven massive. Born Lois LaVerne Williamson on July 9, 1923, to a coal mining family living in a remote Appalachian community in eastern Kentucky, she spent her childhood enamored of cowgirl singers like Patsy Montana, Lulu Belle Wiseman, Texas Ruby Owens, and Lily May Ledford and eventually began singing and playing guitar in a string band with her brothers Cecil ("Skeets") on fiddle and Joe ("Duke") on banjo. In 1939, Skeets began playing on a radio station in Charleston, WV, and his sister soon followed, adopting the stage name "Mountain Fern." A year later, now under the name "Dixie Lee Williamson," she joined guitarist Lynn Davis' band the Forty Niners, and in 1941, she and Davis married.
Over the next five years, the Forty Niners extensively toured the South, building a substantial fan base along the way. By the time the group settled in for an extended stay in Louisville, KY, in 1946, the name "Molly O'Day" was firmly entrenched. While Davis and O'Day's duos were popular with audiences, it was her deeply felt solo performances of inspirational songs which had the biggest impact and which led writer/publisher Fred Rose to sign the singer to Columbia Records. There, O'Day performed a number of songs written by a young Hank Williams, whom she had already known from their days on the radio circuit; in fact, it was Williams who taught O'Day her best-loved song, "Tramp on the Street," one of eight tunes she cut during her first studio session in late 1946. Backed by Davis, her brother Skeets, bassist Mac Wiseman, and George "Speedy" Krise on the Dobro, the recordings gave a further boost to O'Day's surging popularity, but already she was having trouble coping with her success.
O'Day and Davis spent much of 1947 out of music, but in December of that year she returned to the studio, where she recorded her crowd-pleaser "Matthew Twenty-Four." She and Davis spent much of the next several years on the road, where she began performing religious material almost exclusively; in mid-1949, she cut another session, recording songs like "Teardrops Falling in the Snow," "Poor Ellen Smith," and Williams' "On the Evening Train." In the latter half of the year, O'Day suffered a nervous breakdown and was hospitalized; although she did record again in 1950 and 1951, she largely turned her back on show business afterward, instead focusing on performing in churches. In 1954, Davis became an ordained minister, and in the decades following, the couple preached throughout the coal mining communities of West Virginia. O'Day did record for a few small gospel labels in the 1960s, and in 1973 she and Davis began hosting a daily gospel program on a West Virginia radio station. She died of cancer December 5, 1987.