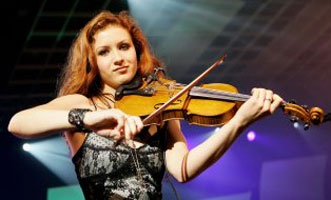 In her relatively short lifetime, Megan Mullins has mastered seven instruments and genres, won numerous musician championships, and worked as a model and actress. The Indiana native began taking violin lessons at the age of 18 months, and won the Indiana State Fair Showmanship Award at the State Fiddle Championship at age three. Mullins comes from a family of professional musicians who toured the country in a van together playing shows through much of her childhood. She began performing with her brother Marcus, and at age 14, they played the Grand Ole Opry. As if she weren't busy enough, Mullins began taking dance, gymnastics, theater, and swimming classes. Since graduating high school at the age of 15, Mullins has worked at perfecting her fiddle playing and singing talent, playing numerous gigs throughout the United States and abroad. At the age of 18, she released her first single on Broken Bow Records, called "Ain't What It Used to Be." The single was met with immediate and overwhelming public response, and her debut album was slated for release in August 2006.