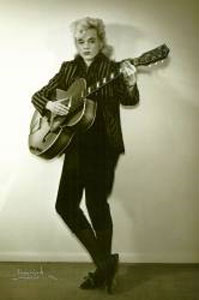 Rockabilly bombshell Sparkle Moore was born Barbara Morgan in Omaha in 1939. The quintessential bad girl, she dressed in leather (and often in men's clothes), with her short blonde hair greased back in an Elvis Presley-styled pompadour--dubbed "Sparkle" in honor of a supporting character in the "Dick Tracy" comic strip, she signed to the Cincinnati-based Fraternity label to issue her debut single, the hiccupping "Rock-a-Bop," in late 1956, and though still just 17 years old she toured the U.S. in support of the record, even opening for Gene Vincent at the peak of his fame. (A planned appearance on radio's Grand Ol' Opry was canceled due to a bout with laryngitis, however.) The sultry yet sinister "Killer" followed in 1957, but soon after Moore learned she was pregnant and abruptly quit performing to focus on raising a family--no subsequent recordings are known to exist, although an unreleased Fraternity ballad called "Flower of My Heart" subsequently appeared on several compilations, most notable among them 2004's Good Girls Gone Bad: Weird, Wild & Wanted, the first to assemble her complete recorded output in one disc (including a handful of alternate takes).