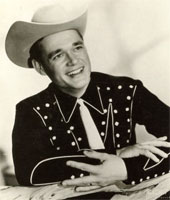 Pianist Merrill Moore's unique style fused Western swing, boogie-woogie, and early R&B in a melting pot that many critics felt was a distinct influence on rockabilly, especially Jerry Lee Lewis. Born in Algona, IA, in 1923, Moore began playing the piano at age seven and by 12 was performing on a Des Moines radio station. After high school, he played in a band on the Midwestern ballroom circuit, taking a break to serve in the Navy during World War II. Afterwards, he married his high-school sweetheart and moved to San Diego, where he started playing the club circuit. He got a regular gig with local club kingpin Jimmy Kennedy and put together the Saddle, Rock & Rhythm Boys as his backing band in 1950. Kennedy helped get Moore a record deal with Capitol in 1952, and that year he released his first single, "Big Bug Boogie." 1953's "House of Blue Lights" became a national hit, but Kennedy refused to allow the band to tour or promote the record: He'd signed them to a seven-year deal to play six nights a week and had only gotten them the record contract to increase their local drawing power. Moore continued to record occasional boogies and novelty tunes for Capitol, issuing an extremely rare self-titled EP in 1955. That same year, he walked out on his contract with Kennedy and moved to Los Angeles.Moore performed regularly on Cliffie Stone's music program Hometown Jamboree and also worked as a session pianist, appearing on records by the likes of Tommy Sands ("Teenage Crush"), Johnny Cash, Faron Young, Hank Thompson, Sonny James, and Kay Starr, among others. He recorded only one more session for Capitol, a selection of instrumentals that wasn't released until 1990 by Bear Family. Moore returned to San Diego in 1962, taking up residency in a hotel lounge. He worked clubs and similar venues for the next couple of decades, sometimes venturing into Nevada and Arizona. A car accident in 1986 put him on hiatus for a few years, but Moore spent most of the '90s playing regularly at Mr. A's in San Diego, leaving in 1998. He lost a battle with cancer on June 14, 2000.