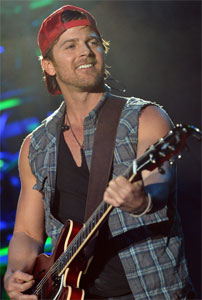 Arriving at the peak of the so-called "bro country" phenomenon of the 2010s, Kip Moore's breakthrough hit "Somethin' 'Bout a Truck" was one of the classics of the genre: a big, shiny tune about good times, cold beer, cute girls, and reliable vehicles. Once it took off in 2012, a few more hits followed -- including the equally emblematic "Beer Money" and "Hey Pretty Girl" -- but the roads weren't always smooth; it took him three years and one scrapped record before he delivered Wild Ones in the summer of 2015.
Born and raised in Tifton, Georgia near the Florida-Georgia state line, Kip Moore was the son of a golfer and a painter. He spent most of his school years playing sports but his attention turned toward playing music while attending Hanceville, Alabama's Wallace State Community College. Moore transferred to Georgia's Valdosta State University on a golf scholarship but soon was lured away by music, finding his first gig at a local Mellow Mushroom and playing with a band. Once he graduated college, he decided to live in Hawaii for a spell before heading to Nashville in 2004. Earning a paycheck as a manager at Abercrombie & Fitch, Moore chipped away at music, starting to earn a reputation in songwriting circles, placing songs with Jake Owen and Thompson Square. In 2008, Creative Artist Agency's Marc Dennis brought Moore to the attention of Joe Fisher at Universal Group Nashville, who signed the songwriter to a deal and paired him with Brett James, who wound up producing Moore's 2012 debut, Up All Night.
First came the single "Mary Was the Marrying Kind," which went to 45 on the Billboard's Country chart, but the record that launched Kip's career was "Something' 'Bout a Truck," a single released in September 2011. Over the next few months, it climbed to number one on the Billboard Hot Country Songs chart -- it also reached 29 on the Hot 100 -- on its way to a double-platinum certification. In the wake of its success, Moore released Up All Night in April 2012 and its next two singles were also Top Ten country hits: "Beer Money" went to seven in the second half of 2012, while "Hey Pretty Girl" became a platinum hit in early 2013.
The first sign of Moore's second album arrived in October of 2013, when he released "Young Love." This topped out at 26, which wound up better than his next single, "Dirt Road." Released in April 2014, "Dirt Road" "stiffed" according to Moore, so he and his label decided to scrap the planned second album and have the singer/songwriter compose a brand-new record. The first single, "I'm to Blame," reached 26 in the spring of 2015 and then the full-length Wild Ones showed up in August 2015. Wild Ones debuted at four on the Billboard Top 200 but its singles didn't crack the country Top 20. Moore released an EP called Underground in the fall of 2016 to tide fans over until his next full-length album, 2017's Slowheart. Preceded by the single "More Girls Like You," Slowheart appeared in September 2017.