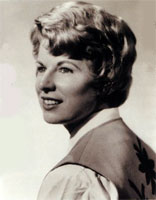 Born Janet Lister, 5 April 1934, Inglewood, California, USA. McBride grew up in North Whitefield, Maine and developed a keen interest in country music and yodelling as a child. She sang with siblings at local venues but after marrying Claude McBride in 1955, they returned to California, where she began a solo career. She first recorded for Toppa in 1960 with Wynn Stewart’s band and during the early 60s, she worked shows with many artists including Merle Haggard and Buck Owens and featured in television shows. In 1965, she relocated to Dallas, where she became the featured Vocalsist at Dewey Groom’s Longhorn Ballroom, appeared on theBig “D” Jamboree and recorded songs and yodels for the Longhorn label. Accompanied by her husband and songwriter Vern Stovall, she played Las Vegas venues and toured to Canada. In 1968, after further tours with Roy Clark and Tex Williams, she relocated to Nashville but returned to Dallas the following year and continued her appearances at the Longhorn Ballroom. When Claude died, in 1973, she retired from singing until 1976, when she married B.J. Ingram, a Dallas County deputy sheriff. Together they started the Saturday night Mesquite Opry, a show which featured both local and touring country artists. In 1984, she achieved a lifelong ambition by singing on stage at the Grand Ole Opry with Patsy Montana, whose yodelling had always been her inspiration. (She had recorded Patsy’s ‘I Want To Be A Cowboy’s Sweetheart’, as her tribute, years before).
During her career McBride, an excellent exponent of the art, has written several yodelling numbers including ‘Best Dern Yodeler’, ‘Yodelling Jan’ and her popular ‘Yodeling Tribute’, which mentions great yodellers including Jimmie Rodgers, Elton Britt and others. She was awarded Western Music Association’s Female Yodeler Of The Year in 1991. Deciding to take things easier, she closed the Mesquite Opry 30 December 1995 but maintained some public concert appearances including touring to Austria in 1996, where she featured at the Vienna Country Music Festival gaining good reviews for her yodelling. She has recorded for several labels with backing provided by such as Ralph Mooney, Phil Baugh and Dale Potter. In the 80s three albums were issued by a German label, one being a compilation of earlier recordings while there have also been cassette releases and in 1996 a CD containing 25 of her own songs.