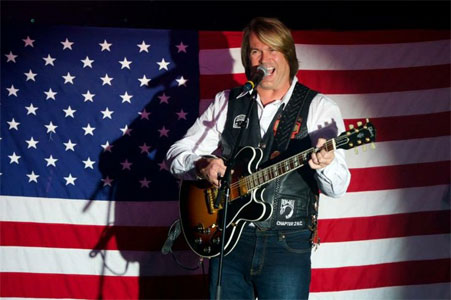 Born in Statesville, NC, to a strict Southern Baptist family, Rockie Lynne got his first guitar at age 12, and soon after he entered high school he was playing in jazz ensembles and various bands. After he graduated, Lynne joined the Army and was stationed at Ft. Bragg as a paratrooper in the 82nd Airborne Division. His love of music never left him, though, and when his time in the military was up, he moved to California to attend the Guitar Institute of Technology on the G.I. Bill. Not having much luck finding a record deal, Lynne moved to Myrtle Beach, SC, and soon got work touring with local musician Mike Shane. When Shane moved to Nashville in the early '90s, Lynne decided to go with him. He earned money backing up various country acts like the McCarter Sisters and Noel Haggard, but what he really wanted to do was perform his own songs. He left Nashville and started touring and selling his own CDs, and eventually ended up settling in Coon Rapids, MN, where he earned a dedicated local following. Bruce Larson, who worked at Warner Bros., saw Lynne performing in a local restaurant and was impressed by his ability to capture the audience. He invited Lynne to play at his house, and eventually a copy of his CD got to Universal, who signed Lynne to their Nashville-based Universal South label and released his debut self-titled album in 2006.