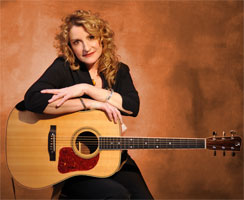 With a high-pitched voice that's been compared to Nanci Griffith and Alison Krauss, Claire Lynch has successfully fused a background in popular music and a love of bluegrass. Born in Kingston, New York, Lynch moved with her family to Hazel Green, Alabama at the age of 12. Inspired by the pop songs of Joni Mitchell and the Beatles, Lynch sang as a youngster in an informal trio with her sisters, but it was as the singer for the bluegrass outfit the Front Porch String Band that finally brought Lynch a wider audience. The Front Porch String Band became one of the hardest-working groups in Alabama. Their self-produced debut album, Smilin' at You, released in 1977, was followed by Country Rain later the same year. In 1981, the Front Porch String Band released a self-titled, nationally distributed album on Rebel, while Claire released her solo debut, Breakin' It, on the smaller Ambush label.
Claire and her then-husband Larry Lynch disbanded the Front Porch String Band in 1982. Claire's songs continued to make the rounds, however, and were soon covered by Stephanie Davis ("Moonlighter"), Patty Loveless ("Some Morning Soon"), and Kathy Mattea ("Hills of Alabam'"), and Lynch was signed by Polygram to a staff writing contract. The Front Porch String Band came back together in a revamped version in 1990, and the following year the band released its comeback album, Lines & Traces. Claire Lynch's second solo album, Friends for a Lifetime, released in 1993 and reissued in 1995, was a celebration of gospel music. Her 1995 album, Moonlighter, was nominated for a Grammy Award as Best Bluegrass Album. Silver and Gold was released in 1997, Lovelight followed in the spring of 2000, and Out in the Country was issued a year later.
She formed her own Claire Lynch Band in 2005, and in March of 2006, after a six-year hiatus, she released New Day on Rounder Records, following it up three years later in 2009 with a second Rounder release, Whatcha Gonna Do. In January 2013, after a long stint with Rounder, Lynch signed a recording deal with Nashville label Compass Records, releasing the ninth solo recording of her career, Dear Sister, on the imprint later that same year.