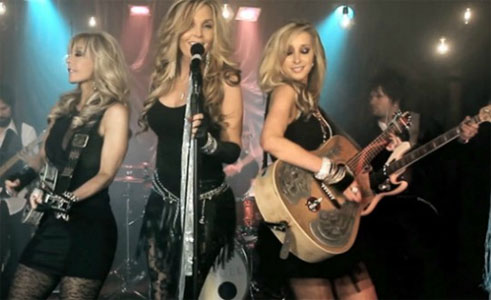 Pop-country group Lucy Angel like to keep things in the family -- Kate Anderton is the mother of her two bandmates, Emily Anderton and Lindsay Anderton. A longtime fan of Loretta Lynn and Tammy Wynette, Kate Anderton got her start in music when she was a child, making her first public appearance at the age of four, and she sang in a college Vocals group where she met her future husband and manager, Doug Anderton. Convinced she had the talent to become a country star, Doug entered Kate in a televised talent show, and she committed herself to a professional career in music. Her daughter Lindsay developed a precocious talent for singing at age four, and was soon joining her mother on-stage. At age 12, Lindsay joined a Vocals group with Kate, and in 2003 the family moved from Arizona to Nashville in hope of advancing their careers. While Emily wasn't interested in singing at first, watching her mother and sister changed her mind, and soon she joined the group, which adopted the name Lucy Angel. In 2004, Lucy Angel made their public debut opening for Neal McCoy, and the group wasted no time hitting the road, performing regularly in the South and making an international impression by playing at country music events in Japan and Switzerland; in 2009, they made two appearances in China, becoming the first American country artists to appear at the Great Hall of the People in Beijing. In 2010, Lucy Angel released a self-titled five-song EP on their own G-Force label, and a Christmas single, "Mr. Santa," appeared in 2011. In early 2015, G-Force teamed with New Revolution to release Lucy Angel's self-titled debut album, which included the single "Crazy Too." As the single began making its way onto radio, Lucy Angel also became the focus of a reality TV series, Discovering Lucy Angel, which debuted on the AXS-TV cable network on January 13, 2015.