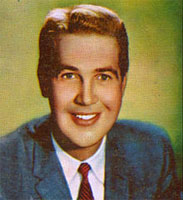 Singer, songwriter, disc jockey, and radio host and personality Jim Lowe is most remembered for his version of "Green Door," a song written by Marvin Moore and Bob Davie, which hit number one on the singles charts in the U.S. in 1956. Born May 7, 1923 in Springfield, Missouri, Lowe had a long run as a disc jockey at WNEW AM in New York, and was also heard on WNBC AM in New York and on the NBC Radio program Monitor. Lowe wrote and recorded a number of early rock & roll sides, most of them novelty-styled titles, and he also recorded covers of the rock & roll hits of the day, usually without improving on them. He sang in a kind of booming radio announcer's voice that puts most of his catalog in the goofy and silly category, and truthfully, Lowe was never really aiming higher or elsewhere. He released things on his own Dot Records imprint, including the albums Songs They Sing Behind the Green Door (1957) and Wicked Women (1958). In the end, he was far more of a radio personality than he was a rock star, which is most likely how he planned it. Lowe retired from the business in 2004 at the age of 77. Jim Lowe passed away on December 12, 2016.