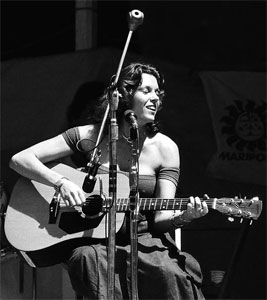 Myrna Lorrie is something of a fixture in Canadian country music, but she never made serious inroads in the American market. Nevertheless, she racked up several Canadian number ones in the '60s -- "I Can't Live with Him," "Tell Me Not to Go," "Turn Down the Music" -- and regularly performed in person and on radio and television, building up a reputation that led to her induction into the Canadian Country Music Hall of Fame in 1989.
There was a time when she attempted to break into the U.S. market, though. It was early in her career, just after her homeland fame was beginning to build. Born in Cloud Bay, Ontario on August 6, 1940, she sang regularly as a child, eventually winding up on local radio programs when she was in her early teens. She came to the attention of Don Grashey, a songwriter who asked her to be Buddy DeVal's duet partner on "Are You Mine." The single was released on Abbott Records in late 1954 and wound up charting in January 1955, climbing all the way to number six on the Billboard country charts (Grashey had simultaneously released another version of "Are You Mine" recorded by Ginny Wright and Tom Tall on his own label; it peaked at number two).
"Are You Mine" pushed Lorrie into the spotlight and she appeared with Hank Snow at the Grand Ole Opry, then cut several more singles for Abbott before moving to RCA in 1957. None of these singles wound up turning into a big hits, and then in 1960 she married and started a family. By the mid-'60s she had returned to her native Canada and was hosting her own television program, The Myrna Lorrie Show, while recording singles for the Canadian market on the Gaity and Musicor imprints; this is where her aforementioned streak of number ones began.
Once the singles dried up -- her last charting single was 1971's "Bringing Mary Home," which scraped the Top 40 at 37 -- she devoted herself to hosting television programs. She was on Countrytime between 1970 and 1974 and Nashville Swing between 1977 and 1981. She played live regularly throughout the '80s, sometimes letting a young singer, Eileen Twain, sing on-stage with her (Twain came to stardom as Shania), and then in 1989 Lorrie had her last hit with "Blue Blue Me." That year she also was inducted into the Canadian Country Music Hall of Fame. She continued to perform and occasionally record throughout the '90s but she slowly wound down her career after that.