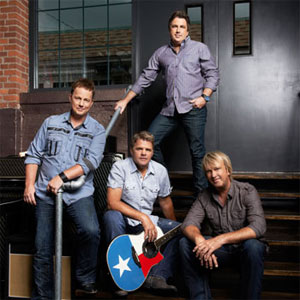 Though their name might lead you to believe that Lonestar was formed in Texas, the quintet actually hails from Tennessee. Originally called Texassee, the band features Richie McDonald (lead Vocals, guitar), John Rich (lead Vocals, bass), Michael Britt (lead guitar, background Vocals), Dean Sams (keyboard, background Vocals), and Keech Rainwater (drums). All the members are in fact Texas natives — they just formed in Tennessee in 1992.
In 1993, Lonestar played their first concert at Backstage Pass in Nashville in January of 1993. A booking agent happened to hear the show. Impressed, he added the group to his roster, and the group headed out on the road. Over the next two years, they played nearly 500 shows. In 1994, the group landed a record contract with BNA Records. The following year they released their eponymous debut, which spawned the Top Ten hit "Tequila Talkin'." Crazy Nights followed in 1997, and two years later Lonestar returned with Lonely Grill, which featured the hit "Amazed." Their seasonal effort This Christmas Time followed in fall 2000, and I'm Already There appeared the next spring. They released three more records after their 2003 greatest-hits compilation From There to Here: 2004's Let's Be Us Again, 2005's Coming Home, and 2006's Mountains. In late 2007, the band announced that Cody Collins had replaced Richie McDonald as lead singer, and that their next album, My Christmas List, would be distributed by Cracker Barrel restaurants; McDonald also happened to release a seasonal album called If Every Day Could Be Christmas that same year.
Lonestar hired Cody Collins as their new lead vocalist and set about recording their eighth album, Party Heard Around the World. The album appeared in April 2010, debuting at 103 on the Billboard 200 and 20 on the Top Country Albums chart, and it soon faded, generating no big hit singles. Soon, Collins left Lonestar and McDonald -- whose solo career also failed to catch fire -- returned to the fold. The reunited Lonestar released Life as We Know it on June 4, 2013. They signed to Shanachie for their next album, 2016's Never Enders.