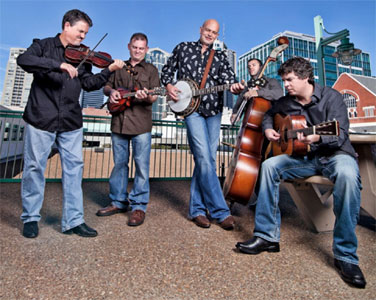 The Lonesome River Band have withstood numerous personnel changes to merge as one of the most highly respected bands in bluegrass. Although rooted in the traditional sounds of Flatt & Scruggs and Bill Monroe, the Lonesome River Band continue to set standards of their own. The recipients of the SPBGMA award as Vocal Group of 1997, the Lonesome River Band continue to fuse ultra-tight vocal harmonies with virtuosic musicianship and well-conceived arrangements.
The original lineup of the Lonesome River Band was assembled by banjo player-turned-lead vocalist and -rhythm guitarist Tim Austin and featured Steve Thomas on mandolin and fiddle, Rick Williams on banjo, and Jerry McMillan on bass. After attracting attention on the local bluegrass circuit in Virginia, the Lonesome River Band released their debut album, I Guess Heartaches Are in Style This Year, in 1985 on the regional label Shar-Lynn. Their national debut came with a self-titled album, released by Rebel, the following year.
The Lonesome River Band have been evolving at a steady clip since the early-'90s with the arrival of lead vocalist and bass player Ronnie Bowman and banjo ace Sammy Shelor. North Carolina-born Bowman sang gospel music with a family group from age three until his late teens and is equally effective singing traditional bluegrass tunes as he is voicing songs by contemporary singer/songwriters. Shelor, who inherited his love of the banjo from his grandfathers, began to play the five-stringed instrument at age five. Although he learned his early technique from an old-timey clawhammer banjo player Carp Ayers, Shelor's approach to the instrument has been as much influenced by the playing of Earl Scruggs, J.D. Crowe, Ben Eldridge, Allen Shelton, Pete Wernick, and Béla Fleck. Shaping his performance skills with local bluegrass bands in North Carolina and Virginia, Shelor was a founding member of the Virginia Squires in 1983. He remained with the Squires until 1989 when he was joined the Lonesome River Band.
The reorganized Lonesome River Band hit their stride with their first album together, Carrying the Tradition, which debuted at the top slot on the best-selling charts compiled by Bluegrass Unlimited. It remained on the charts for five months before being supplanted by the band's next release, Old Country Town, which remained at the number one position for six months.
In the aftermath of their success, founding member Tim Austin left the Lonesome River Band to devote more time to working in his home recording studio, Doobie Shea. Although he was replaced by Kenny Smith, of Claire Lynch's Front Porch String Band, Austin continued to work with the Lonesome River Band on their albums. The newest member of the Lonesome River Band, Don Rigsby, who sings tenor vocals and plays mandolin, is a veteran of such bands as J.D. Crowe & the New South, the Bluegrass Cardinal, and previously worked with Vern Gosdin. The first album by the reconstructed lineup, One Step Forward, was released in 1996.
Each member of the current Lonesome River Band has recorded memorable solo albums. Bowman, who was named Vocalist of the Year by the International Bluegrass Music Association (IBMA) in 1995, delivered the most successful of the solo albums, Cold Virginia Night, which won the IBMA award as Best Album of the Year in 1997. Bowman followed it with a second solo album, The Man I'm Tryin to Be in 1998. Shelor, who was named the IBMA's Banjo Player of the Year in 1995 and 1998, released Leading Roll in 1997 with guest appearances by Tony Rice, Sam Bush, Jerry Douglas, and Alan O'Bryant of the Nashville Bluegrass Band. Rigsby's solo debut, A Vision, celebrated his religious views and featured a duet with Ralph Stanley. Smith's Studebaker, released in 1997, spotlighted his songwriting talents and featured instrumental and vocal support from the other members of the Lonesome River Band.
The Lonesome River Band were featured on several tracks of John Fogerty's 1997 album Blue Moon Swamp. Their Finding the Way album followed a year later, and in mid-2000 the group returned with Talkin' to Myself. The year 2002 saw the release of Window of Time, another crisp set of expertly rendered picking and singing, followed by Head on into Heartache in 2005. In 2006, the band added Knoxville, Tennessee, Dobro player Matt Leadbetter (son of Dobro player Phil Leadbetter), who appeared on Road with No End, released that year.
The Lonesome River Band signed with Rural Rhythm in 2008, releasing No Turning Back that year. Over the next four years, the band released four albums on Rural Rhythm -- including a three-part anthology called Chronology -- before returning to Mountain Home in 2014 for Turn on a Dime. Coming Back Home to You followed in 2015, with Bridging the Tradition appearing in 2016 and Mayhayley's House hitting the stores in 2017.