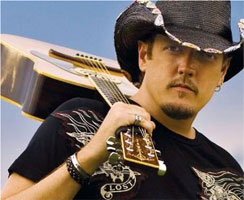 A sixth-generation Texan, honky tonk rocker Zane Lewis was born in Lubbock, a town famed for its musicians (Buddy Holly being the most notable), and raised in Round Rock just north of Austin. His father was a fiddle player who had his own western swing band in college so Lewis grew up hearing not only the music of Bob Wills but also the music of the other artists in his father's record collection, including Willie Nelson, Waylon Jennings, and the Eagles. Later Lewis gravitated to George Strait and the southern country rock of Lynyrd Skynyrd and Charlie Daniels as well as the harder rock sounds of Van Halen and the tireless conviction of bands like U2. He began playing guitar while he was a student at Texas Tech, and while he sang constantly in private, Lewis wasn't quite ready to make the move to being a professional singer. After graduating with a degree in advertising, Lewis moved into the magazine publishing business, establishing a successful equestrian magazine called Western & English Today, and the money he made from selling it to a larger publishing firm financed his debut 2003 album, This Town, which Lewis recorded with members of LeAnn Rimes' road band. The album was a regional hit with the title track actually grazing the bottom of the national country charts and generating some radio time. The follow-up album, the self-titled Zane Lewis, produced by Lex Lipsitz and Brett James, was released in 2008 by Slant Records.