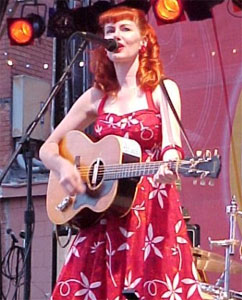 With a mom who rode in rodeo and a dad who was a fan of Wolfman Jack, rockabilly queen Kim Lenz learned about good music early on during her youth in southern California. She grew up listening to the recordings of such artists as Janis Martin, Wanda Jackson, Faron Young, and Johnny Horton. During her childhood she played the piano, and she started playing the guitar during her teen years. For a time when she lived in Los Angeles, her workplace's radio only picked up the music of the big band era, which led her to become acquainted with many of the old standards. At one time, Lenz majored in psychology while she attended the University of North Texas. Before she earned her degree, she hooked up with a few musicians who wanted to form a band. Lenz joined in, and the half a dozen singers and musicians called themselves Rocket, Rocket. Before a year had passed, however, the group disbanded. In 1994, she settled in Dallas, where two years later she pulled together a band of her own, the Jaguars. Lenz's backing band consists of Tom Umberger on lead guitar, Shawn Supra on bass fiddle, and Scotty Tecce on drums.
In 1996, Lenz and the Jaguars put out an EP on the label Wormtone, which is based in Colorado. The Dallas Observer named the rockabilly redhead Best Female vocalist the following year. Hightone's Larry Sloven heard the EP and was so taken by Lenz's sound that he offered a recording contract with Hightone's subsidiary, HMG. The label issued the band's eponymous album in 1998. Of the recording's 14 tracks, Lenz penned more than half. Also featured on the album were covers of "Ten Cats Down," originally recorded by the Miller Sisters, and "The Swing," recorded previously by Johnny Carroll. The release featured Wally Hersom, the bassist for Big Sandy & His Fly-Rite Boys, in the producer's chair in an effort to get that rockabilly sound just right. He collects vintage recording apparatus, and through that type of equipment he helped Lenz and her Jaguars achieve the desired sound. The following year, Lenz released The One And Only. Lenz's second release for Hightone, Up to my Old Trick Again, was released in 2005. In 2009, Lenz returned with the studio album It's All True.
After the release of It's All True, Lenz found out that she had been adopted. The news came as a shock and subsequently, she entered a period of deep self-reflection. Also around this time, Lenz suffered another blow with the death of longtime friend and bandmate, guitarist Nick Curran, from cancer. It was out of this period of turmoil however, that Lenz developed the music for her next album, 2013's Follow Me. Featuring production from journeyman roots music pianist Carl Sonny Leyland, Follow Me showcased Lenz' newfound strength and swaggering rockabilly attitude.