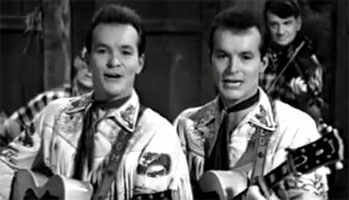 This popular duo, also on occasions referred to as Australia, comprises identical twins Tom (the eldest by 30 minutes) and Ted Legarde (b. 15 March 1931, Mackay, Queensland, Australia), the youngest members of a family of nine. They were raised on the family farm, both becoming expert horsemen. At the age of 15, clutching an old guitar and influenced by cowboy films and the recordings of Wilf Carter, they left home. They worked on Queensland’s largest cattle ranch, took part in cattle drives and rode in rodeos, and they began singing at a Victoria rodeo, when they failed to win any prize money but needed to eat. They joined Buddy Williams’ touring rodeo and circus and, at the age of 17, became Australia’s youngest professional rodeo riders. They soon found singing to be less painful than rodeo work and concentrated on it. In 1950, they made their first recordings for Rodeo, but between 1952 and 1957, they had several single releases on Regal Zonophone Records. In 1954, they toured Australia with their boyhood idol Hopalong Cassidy (William Boyd), but in 1957, they decided to seek success in America. They first played shows in Canada but later hosted their own television series in Los Angeles. Between 1958 and 1963, they relocated to Nashville, where they recorded singles for Dot Records and Liberty Records and made appearances on the Grand Ole Opry, debuting with their own song, ‘Cooee Call’. They returned to Australia, where they briefly ran a country show from a Paddington, Sydney theatre, recorded albums for Columbia Records and compèred two local country shows. In 1965, they returned to the USA where, under ‘ Colonel’ Tom Parker’s management, they worked in Las Vegas and even appeared in television’s Star Trek. They recorded for numerous labels and in 1978, as the Le Gardes, they achieved a minor hit with ‘True Love’ (a cover of the 1956 Bing Crosby /Grace Kelly pop hit) on Raindrop. A further minor hit came in 1978, with ‘I Can Almost Touch The Feeling’ on 4 Star. In 1980, as the Legarde Twins, they achieved a minor hit, ‘Daddy’s Making Records In Nashville’, for Invitation 101. In 1987, they were awarded Hall Of Fame status at Australia’s prestigious Tamworth Country Festival and during the 80s, they launched their own Boomerang label and made several appearances in the UK, including at the Wembley Festival. Their last US country chart entry reached number 92, ‘Crocodile Man From Walk-About-Creek’, in 1988. During the 90s, they have operated their own theatre near Nashville’s Music Row.