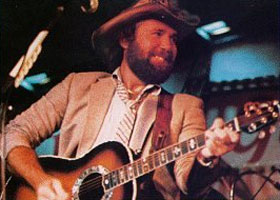 Texas-born country singer Johnny Lee spent years as a journeyman performer, playing Lone Star honky tonks and recording for various labels, before finally breaking through as a major crossover star with the 1980 hit "Lookin' for Love." John Lee Ham was born in Alta Loma, Texas on July 3, 1946, and he came of age listening to first-generation rock & roll artists such as Elvis Presley, Chuck Berry, and Jerry Lee Lewis. Billing himself as Johnny Lee, Ham went from fan to performer in high school, when he and his friends formed a band called the Road Runners. The Road Runners' local success came to a halt when Lee joined the Navy and served in Southeast Asia as America's involvement in Vietnam grew. After Lee was discharged, he bounced around from Texas to California looking for gigs, and landed his first serious break when he met honky tonk man Mickey Gilley in 1968; Lee reminded Gilley of the time they had met and talked music in Galveston, Texas, and Gilley allowed Lee to join him on-stage that evening. Gilley eventually signed Lee as a backing vocalist and trumpet player, unaware that Lee was pulling his leg and the two hadn't previously met.
For five years, Lee was part of Gilley's band for his standing engagement at Gilley's nightclub in Pasadena, Texas, and when Gilley was playing road dates, Lee was the headliner in his absence. Lee stepped out as a solo act in 1973; he cut a few songs for the tiny Astro label, but when they failed to chart, he started working with Gilley again. Lee scored minor successes recording for ABC/Dot ("Sometimes") and GRT ("Country Party"), but Lee's shot at the big time came in 1979, when filmmaker James Bridges came to Texas to shoot the movie Urban Cowboy. Irving Azoff, the high-powered music business mogul who was producing the film and coordinating the soundtrack, helped Lee land a small part in the film playing himself, and asked Lee to record a song for the soundtrack. Lee was given the song "Lookin' for Love," and when Urban Cowboy's soundtrack album came out in tandem with the film in 1980, "Lookin' for Love" rose to number one on the country charts and number five on the pop charts. Now signed to Azoff's Full Moon label (distributed by Warner/Elektra/Asylum), Lee dropped his own album titled Lookin' for Love, and it spun off three more country hits, "One in a Million," "Pickin' Up Strangers," and "Prisoner of Hope."
Lee's days on the pop charts were over by 1981, but he was a consistent hitmaker on country radio for the next few years, touring regularly with his own band and charting high with tunes like "Bet Your Heart on Me," "Sounds Like Love," "Hey Bartender," "You Could Have Heard a Heart Break," and "The Yellow Rose" (the latter a duet with Lane Brody). Lee even landed a TV star spouse, marrying Charlene Tilton, one of the stars of Dallas, on Valentine's Day, 1982. However, Lee and Tilton split up in 1984, and a year later, Lee recorded his last album for WEA, 1985's Workin' for a Livin'; after 1989's New Directions, a one-off release for Curb, Lee's days with the major labels were done, with the album's highest charting single, "I Can Be a Heartbreaker Too," peaking at a disappointing number 53 on the country charts.
If Lee's recording career was starting to fade, he remained active as a touring act, playing regularly in Texas and the Southwest, and documenting two shows with independent live albums, 1999's Live at Gilley's and 2002's Live at Billy Bob's Texas. Lee continued to record for smaller labels, releasing The 13th of July in 2003, It's a Long Way Back in 2004, and the holiday-themed album Santa Claus Is Lookin' for Love in 2005. In 2008, Lee began appearing regularly in Branson, Missouri, playing his hits for his longtime fans. While business dealings led to a falling out between Lee and Mickey Gilley in the '80s, in 2015 the two buried the hatchet and reunited for a concert tour celebrating the 35th anniversary of the release of Urban Cowboy.