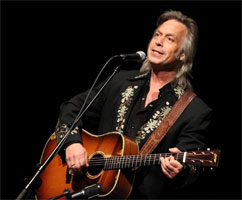 Singer/songwriter Jim Lauderdale helped lay out the blueprint for the Americana movement of the '90s, earning high critical marks for an eclectic series of albums that spanned hard country, slick pop, rootsy rock & roll, blues, folk, R&B, and bluegrass. He never sold that many records on his own, but his compositions were recorded — often with considerable success — by a number of contemporary country stars, including George Strait, Patty Loveless, Vince Gill, Mark Chesnutt, Kathy Mattea, and George Jones, among others. Lauderdale was born in Statesville, NC, in 1957 and grew up loving country music; however, he was also drawn to the theater and later moved to New York, where he landed roles in two national touring productions. He subsequently settled in Los Angeles, where he began playing the now-legendary alt-country hot spot the Palomino Club. With Dwight Yoakam producer Pete Anderson behind the boards, he recorded a track for the seminal compilation A Town South of Bakersfield, which helped him — briefly — land a record deal with CBS. He completed an album in 1989, but the label declined to release it; it finally appeared over ten years later on an overseas label as Point of No Return.Undaunted, Lauderdale signed with the Bluewater music publishing firm in Nashville, where his compositions found immediate success in the contemporary country world. Additionally, he sang backup on records by Yoakam, Lucinda Williams, and Rosie Flores and toured with everyone from Freedy Johnston, Nick Lowe, and Hootie & the Blowfish to Johnny Cash and Merle Haggard. He earned another shot with Reprise and issued his debut album, Planet of Love, in 1991, with production from Rodney Crowell and John Leventhal. The album was greeted with strong reviews by many critics, who hailed Lauderdale as a major new talent. Still, it would be three years before he would release another record; he returned in 1994, now on Atlantic, and issued two acclaimed albums over the next two years in Pretty Close to the Truth and Every Second Counts. In 1996, he moved over to roots label Rounder's Upstart subsidiary for Persimmons, yet another critical success.
Hopping to BNA, Lauderdale released Whisper in 1998, then returned to the majors on RCA, issuing the somewhat slicker-sounding, more commercial Onward Through It All in 1999. That same year, Lauderdale also took a detour into traditional bluegrass, recording the collaborative album I Feel Like Singing Today with the legendary Ralph Stanley for Rebel. Lauderdale finally found a more permanent home on Dualtone and debuted with 2000's The Other Sessions, a return to hardcore country. 2002 brought two projects: another album with Stanley, called Lost in the Lonesome Pines, and a country record called The Hummingbirds. Ever prolific, Lauderdale released Wait Til Spring in 2003, Headed for the Hills in 2004, Bluegrass in 2006, and The Bluegrass Diaries in 2007. Honey Songs, credited to Jim Lauderdale & the Dream Players, was issued in 2008. Could We Get Any Closer? appeared in 2009. Moving to Sugar Hill Records, Lauderdale released Reason and Rhyme in 2011, this time teaming with lyricist and longtime collaborator Robert Hunter on a set of new bluegrass-themed songs. He next teamed with longtime friend and fellow country roots singer and songwriter Buddy Miller for 2012's Buddy and Jim, released by New West Records.
Though he didn't record until the middle of 2013, Lauderdale released three albums on his Sky Crunch label within two months. The first, Old Time Angels was a bluegrass date that appeared in October. It was followed by the simultaneously issued solo acoustic Blue Moon Junction and the grimy swamp rock Black Roses in November. The latter was produced by Luther Dickinson (who also played guitar), with Cody Dickinson on drums, Amy LaVere on upright bass and backing vocals, and Spooner Oldham and Ian McLagan on piano. Lauderdale spent time writing for country artists and for the TV series Nashville, and released I'm a Song in June of 2014 on Sky Crunch through New West. Lauderdale was also the subject of a feature-length documentary film, Jim Lauderdale: The King of Broken Hearts, which was directed by Jeremy Dylan and released in the fall of 2014.
Lauderdale's ambitious double-set Soul Searching was released in October 2015; one disc was recorded in Memphis, the other in Nashville, and each found Lauderdale playing with veteran musicians steeped in classic blues and R&B sounds as the artist explored his love of classic soul music. This Changes Everything, released through Sky Crunch in the fall of 2016, was a set of tunes written and performed in classic honky tonk style, and less than six months later, Lauderdale had another album ready for release. Arriving in 2017, London Southern was recorded in England at London's Goldtop Studios, with producers Neil Brockbank and Robert Trehern at the controls and several members of Nick Lowe's backing band providing accompaniment. In August 2018, the prolific Lauderdale dropped two albums on the same day -- Time Flies, a collection of recent recordings in a contemporary style, and Jim Lauderdale & Roland White, a collaboration with the legendary bluegrass mandolinist that was recorded in 1979 but not previously released. 2019's From Another World was an ambitious project that fused elements of country, pop, and psychedelic rock. For 2020's When Carolina Comes Home Again, Lauderdale assembled a set of tunes that paid homage to his native North Carolina as well as its sibling to the South. John Oates and Robert Hunter were among the songwriters who collaborated with Lauderdale for the project.