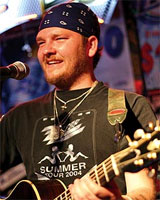 Stoney LaRue plays music that combines the rootsy, emotionally honest sound of country with the beer-drinking swagger of heartland rock and a dash of the moody undercurrents of the blues. LaRue was born in Taft, TX, to a musical family -- his father played bass in a number of local bands -- and he grew up listening to the country and Southern rock that would inform his later work. When he was a teenager, LaRue's family pulled up stakes for Oklahoma, and with time LaRue would become part of the Stillwater, OK, "Red Dirt" musical community, along with likeminded acts such as Cross Canadian Ragweed, Jason Boland, and Mike McClure. Forming a road band called the Organic Boogie Band, LaRue began storming honky tonks and dancehalls in Oklahoma and Texas, winning a loyal following for his passionate live shows, and in 2002 he released his first album, Downtown, recorded during a concert for a specially invited audience at Cain's Ballroom in Tulsa, OK. The album was a solid calling card for LaRue and his group, and they began spending most of the year on the road, playing up to 300 dates a year, but in 2005 LaRue stayed in one place long enough to record his first studio disc, appropriately titled The Red Dirt Album, which earned enthusiastic reviews and cast a stronger focus on LaRue's skills as a songwriter. In the spring of 2007, LaRue released his third album, which was also his second live set -- Live at Billy Bob's Texas, recorded during a 2006 gig at the famous Fort Worth venue.