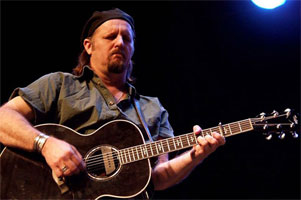 Austin-based singer/songwriter and guitarist Jimmy LaFave brings a passionate rock & roll energy to his original folk songs, whether he's playing solo or with a band. LaFave grew up in Wills Point, east of Dallas, but at 17, his family moved to Stillwater, OK. When he was in his teens, his mother purchased his first guitar for him with green stamps. While Stillwater was not exactly bustling with musical activity, it wasn't a ghost town either, and it was close enough to Tulsa that LaFave found all the opportunities he was seeking as a young singer/songwriter. The musical heritage of the area certainly was rich enough: folksinger Woody Guthrie, jazz trumpeter Chet Baker, and jazz fiddler Claude "Fiddler" Williams, plus songwriter J.J. Cale and Leon Russell's Shelter Studios. But to find a wider audience and, more importantly, a record deal, LaFave thought it would be worthwhile to move to Austin. He found both after moving to Austin in 1985, and he's been based there ever since.
LaFave found a home in Chicago House, an Austin coffeehouse, and he spent the next eight years hosting open mikes there, honing his presentation skills as a solo artist. Through the latter half of the 1980s, he also worked with his band, Night Tribe, at other Austin clubs. With backing from Mark Shumate, a computer entrepreneur, LaFave was finally able to record his debut for Bohemia Beat Records, a company Shumate founded in 1992.
LaFave has released three albums for Bohemia Beat: Austin Skyline, (1993), his debut, a live recording titled as a play on Bob Dylan's Nashville Skyline album; Highway Trance (1994), a studio album that showcases his considerable skills as a guitar picker, singer, and songwriter; and 1995's Buffalo Return to the Plains, which contains just one cover, prime inspiration Bob Dylan's "Sweetheart Like You." LaFave counts among his other influences Jackson Browne, Chuck Berry, and Jerry Lee Lewis.
LaFave's grassroots approach should give him a better foundation on which to build a successful career. The way he blends country, blues, folk, and early rock & roll, his work ethic, and low-key rapport with fans are all factors that work in his favor. Trail was issued in 1999; Texoma followed in early 2001. His next two albums -- 2005's Blue Nightfall and 2007's Cimarron Manifesto -- were issued by Red House Records.