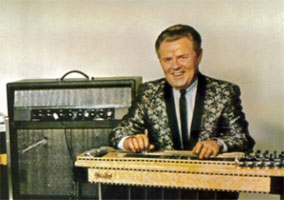 One of the premier steel guitar and Dobro players of the postwar generation, Shot Jackson was a solo and session artist who also gained fame as a designer and manufacturer of musical instruments. Born Harold B. Jackson on September 4, 1920, in Wilmington, NC, he earned the nickname Buckshot — later abbreviated to simply Shot — while still a child. His interest in music also began at an early age, and he became a devoted fan of the Grand Ole Opry, in particular of Roy Acuff's Smoky Mountain Boys and their Dobro player, Bashful Brother Oswald. In 1941, Jackson joined the house band on a local country radio station, and in 1944, he moved to Nashville to sign on with the Opry as a sideman for Cousin Wilbur Westbrooks.
After a year in the Navy, Jackson began playing electric steel guitar with the Bailes Brothers and continued performing with the group throughout their tenure on the Shrevport, LA, station KWKH's Louisiana Hayride program. After the Bailes Brothers left the show, Jackson remained at KWKH, where he performed and recorded with the likes of Webb Pierce, Jimmie Osborne, and Red Sovine. In 1951, he joined Johnnie & Jack's Tennessee Mountain Boys, and over the next half-dozen years, he played Dobro on virtually all of the group's live dates and studio sessions. He also played on many of Kitty Wells' first hits, in addition to recording a few solo sides.
In 1957, Jackson fulfilled a personal dream by becoming the electric steel player for Roy Acuff's Smoky Mountain Boys and remained with the group for five years. During his affiliation with Acuff, Jackson and Buddy Emmons designed an electric pedal steel guitar; to market it, they founded their own company, Sho-Bud. Gradually, the company's success began to absorb more and more of Jackson's time, and he left the Smoky Mountain Boys, although he did remain an active musician, particularly as a steel player for Melba Montgomery, who had also left Acuff to go solo some time before. In addition to working with Montgomery (on both her solo work and her duos with George Jones), he recorded with many other artists and even cut his own solo LP, Singing Strings of Steel Guitar and Dobro, in 1962.
Jackson rejoined Acuff full-time in 1964, but his tenure abruptly ended in July of 1965 when he, Acuff, and singer June Stearns were all sidelined by a near-fatal car crash. After a long recovery period, he began performing with his wife Donna Darlene, a former vocalist on the Jamboree program; in 1965, he also issued the solo record Bluegrass Dobro. His latest creation, a seven-string resonator guitar called the Sho-Bro, hit the market not long after, and again, Jackson distanced himself from music to focus on business. Still, he continued to play on occasion, rejoining the Bailes Brothers for a number of reunion concerts and recordings. He also hooked up with the Roy Clark Family Band for a pair of albums and appearances on the TV program Hee Haw. In 1980, Baldwin-Gretsch purchased Sho-Bud, and three years later, Jackson sold his instrument repair business as well. Soon after retirement, he suffered a stroke which left him unable to speak and play music. In 1986, he was inducted into the Steel Guitar Hall of Fame; shortly after suffering another stroke several years later, Jackson died on January 24, 1991.