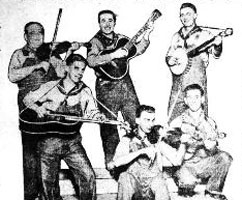 US Country group, the first use of “Hill Billy” on a phonograph record was made less out of intention than convenience, when after their second recording session (the first had been a failure) Ralph Peer asked what he should call the group, and got the response “We’re nothing but a bunch of hillbillies from North Carolina and Virginia. Call us anything.” The band that would become, at turns, The Hill Billies, Al Hopkins’ Original Hill Billies, and Al Hopkins and His Buckle Busters, was not initially at ease with the “hillbilly” appelation – it was considered, at best, humorously pejorative to these musicians who thought of themselves and their music as anything but unsophisticated. Nonetheless, the name stuck and was greeted with good-natured approval back home.
The Hill Billies formed out of a Galax, Virginia barbershop in 1924, when guitarist Joe Hopkins went to get his hair cut and met barber Tony Alderman, who played the fiddle. The two hit it off immediately, and soon Joe’s brother Al, a pianist, and John Rector, a local shopkeeper and banjo player, joined in. Al became the leader of the group, considered distinctive for their incorporation of piano, an instrument not typically associated with the Appalachian fiddle tunes in which the group specialized. By the late 1920s the group had recorded for Okeh (with Peer), Vocalion, and Brunswick, received substantial radio play, and become regulars at fiddler’s conventions, vaudeville shows, and political rallies. In 1925 they added a second fiddle player, Charlie Bowman, to fill out their sound. Their frequent appearances on Washington, D.C.’s WRC radio station may have strengthened the connection between the term “hillbilly” and the type of music listeners were hearing increasingly over the airwaves by the mid-1920s.
The Hill Billies recorded and performed, under their various names, until 1932, when Al Hopkins was killed in a car accident.