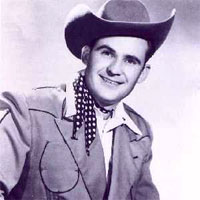 Western swing guitarist Billy Gray was born in december 29,1924 in Paris, TX, and raised in a poor family. As a boy, he worked in the fields to earn money for his first guitar, which he purchased from a local pawnshop. At 19, he organized a band and hosted his own radio show in Paris. For the next few years, he logged a series of tours around Texas and the Southwest, eventually landing in Dallas. There he became the leader of Hank Thompson & His Brazos Valley Boys. He and Thompson eventually founded the Texoma Music Publishing Company and the Brazos Valley Publishing Company, and the two co-wrote some of Thompson's greatest hits, including "Waiting in the Lobby of Your Heart," "The New Wears off Too Fast," and "A Fool, a Faker." In 1954, Gray's lone charting hit was issued. "You Can't Have My Love" was a duet with rockabilly screamer Wanda Jackson. The following year, he and his band, the Western Oakies, released Dance-O-Rama, but the album failed at charting any singles. Gray went on to work as a sideman for other bands, including the Nuggets and the Cowtowners, and also appeared on the syndicated TV show Music Country Style. He recorded one more album in 1965 on Longhorn Records, but faded from the public eye soon after. Billy Gray died in March 27, 1975 while undergoing heart surgery.