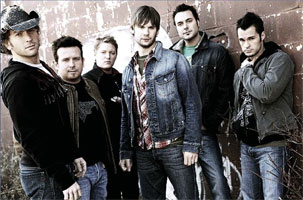 Emerson Drive began in the western Alberta town of Grand Prairie, where singer Brad Mates, bassist Jeff Loberg, fiddler Pat Allingham, and keyboardist Chris Hartman began honing their sound as high-school talent-show competitors. After everyone came on board, they chose the name 12 Gauge, refurbished a rickety old school bus, and began gigging throughout Canada. Eventually guitarist Danick Dupelle and drummer Mike Melocon joined up, and new manager Gerry Leiske sent the young sextet out on the road yet again. The six hard years of touring paid off when a Nashville showcase impressed industry powerhouse Dreamworks into offering a contract in 2001. The band's self-titled debut arrived in May of the following year. Produced by Richard Marx, the album was a slick pop-country affair that had as much in common with boy bands like BBMak as it did with country new traditionalists such as Mark Wills.