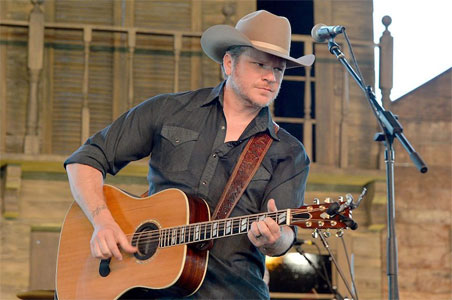 Jason Eady is a charting Texas-based country and Americana singer and songwriter. He was born outside Jackson, Mississippi in 1975. Though his earliest love was country music, he was exposed to a wealth of sounds from the lower Delta region: blues, soul, vintage R&B, and swamp rock.
At 14, he began singing and playing guitar in cover bands and writing songs. His early original efforts were greeted with apathy by audiences in his home state who were more interested in hearing performers sing hits and covers.
At 18, Eady moved to Nashville to seek a recording contract. Despite market interest, he quickly became disillusioned with the business and culture of the mainstream industry. He decided to return to Mississippi. On the drive home, he encountered an Air Force recruiting station and went in. He enlisted and served for the next six years as an Arabic translator, which left little time to play guitar, let alone write songs.
After leaving the Air Force, Eady moved to Fort Worth, Texas and got a day job working in a bank's IT department. As an outlet, he began playing open-mike nights and developed a local following. A transformative revelation from this experience was learning that Texas audiences differed considerably from those in Mississippi: they wanted to hear original music, not covers. He began to work on his songwriting, and soon thereafter quit his day job to devote himself to music full-time.
Eady's first album was 2005's From Underneath the Old, followed by 2007's Wild Eyed Serenade. He met veteran songwriter Kevin Welch in 2008. Welch had made a career as a recording artist and songwriter; he'd penned songs for Don Williams, Patty Loveless, Ricky Skaggs, and many others, and he'd done it all without making aesthetic compromises. This inspired Eady.
Welch went on to produce Eady's following efforts. Their first album together was 2009's When the Money's All Gone. The critically acclaimed AM Country Heaven was released in 2012, and landed in the Top 40 of Billboard's Country Albums chart. In 2013, Eady and Welch collaborated again on Daylight/Dark. It was released in January 21, 2014 and hit the digital country charts the day after; it peaked at 45 on Billboard's Country charts. Three years later, Eady returned with an eponymous