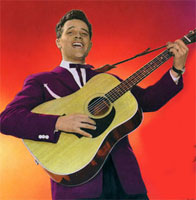 The American-born British skiffle star Johnny Duncan (not to be confused with the Texas-born country singer of the same name from the 1970s) brought a brand of country music to England during the late '50s, enjoying considerable success in the process. His popularity lasted only for the duration of the British skiffle boom, from the summer of 1957 to the end of that year, beginning with "Last Train to San Fernando" (a British number two hit) and ending with "Blue Blue Heartache" and "Footprints in the Snow." The latter had been a hit for bluegrass legend Bill Monroe, and Duncan claimed to have been a member of Monroe's band, but the doubts about that claim were only one area of mystery behind this most elusive figure ever to achieve stardom in country music (after a fashion) or to become a recording star England.
Duncan claimed Tennessee as his place of birth, and gave his birthday as September 7, 1931, but none of this information could ever be verified. The date may have been real, but the Tennessee birthplace was later deemed to be a complete fabrication, to make his status as a singer of folk- and country-style music more authentic. He was probably born in Michigan, and was stationed in England during his American military service. He married in England, and Duncan and his wife apparently went to America in the mid-'50s after the end of his military service, but they came back to England in 1955 when his wife fell ill. He'd done some singing, and on seeing the new level of interest in American music, Duncan decided to try his luck at a musical career. The "Southern" accent with which he presented himself was later deemed to be an affectation, but it fooled many Britishers at the time.
In 1956, he was spotted singing American country songs by jazz bandleader Chris Barber, who had recently lost the leader of his group's skiffle outfit, Lonnie Donegan, to a solo career. Duncan auditioned and was accepted into the group, and he stayed with Barber's band until 1957. Duncan decided to go solo that year, with a band comprised of bassist Jack Fallon, drummer Lennie Hastings, and guitarist Bryan Daly, who was later replaced by top-flight jazz player Denny Wright, a veteran of Donegan's band. The group was christened the Blue Grass Boys, in "honor" of Monroe's group, and was all part of Duncan's charade of having played with Monroe.
Although Duncan was being sold as a skiffle man, he was really more of a country singer, and his direct influences included Jimmie Rodgers and Red Foley, as well as Bill Monroe and Hank Williams. He was signed to the Pye/Nixa Records label, which was Donegan's label, and was assigned Denis Preston, the same producer who was working on Donegan's records.
Duncan's first release, recorded when Daly was still in the band, was a four-song EP featuring "Freight Train Blues," "Press On," Jimmie Rodgers' "Johnny's Blue Yodel," and the Cliff Bruner standard "Out of Business." This stuff was solid country-style material, lacking some of the excitement of "Rock Island Line" and other early skiffle, but perfectly fine as country-blues, and more authentic than anything else in England at the time, since Duncan -- Southerner or not -- was an American, and at least had that part of the accent right. This release from the early spring of 1957 didn't do much, but then fate played a card. Preston discovered a calypso-style number called "Last Train to San Fernando" and brought it to Duncan.
By that time, Denny Wright -- who could play guitar about as well as anyone in England -- was in the band. "Last Train to San Fernando" was cut as a country song and got a 17-week run on the charts, getting all the way to number two, kept out of the top spot only because of competition from Paul Anka's latest record. Duncan never had another hit anywhere near as big, but he continued to record right into the '60s, doing country-style numbers like John D. Loudermilk's "Tobacco Road," Roger Miller's "Dang Me," and the Flatt & Scruggs hit "The Ballad of Jed Clampett." He appeared with Peter, Paul & Mary on their British television special of 1963, and as late as 1967, he was still performing on the cabaret circuit. His last known recordings, done for English Decca, date from early 1973. Duncan is said to have moved to Australia in the mid-'70s, and hasn't been seen or heard from since.