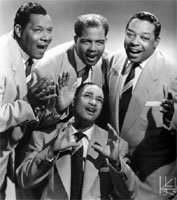 New York's Du Droppers managed to score two Top Five hits during their short run: "I Wanna Know" (number three R&B) and "I Found Out (What You Do When You Go Round There)" (number three pop). The original members were Caleb Ginyard -- aka "J.C." or sometimes "Junior" -- on lead, brothers Willie Ray and Harvey Ray on tenor and baritone, respectively, and Eddie Hashow on bass (who was soon replaced by Bob Kornegay). They began as a gospel group in 1952; each member had been in previous gospel groups (including the Royal Harmony Singers, the Dixie-Aires, the Jubilaires, and the Southwest Jubilee Group). The Du Droppers began performing R&B Vocals-group songs and soon auditioned for record producer Bobby Robinson and DJ Joel Turnero, both owners of the Harlem-based label and record shop Red Robin.
Their first record, "Can't Do Sixty No More," released by the group in December 1952, was an "answer" record to the massively popular Dominoes hit, "Sixty Minute Man." It earned the group instant popularity and airplay, but Red Robin let The Du Droppers slip through their fingers; soon the group was recording for RCA Victor, one of the major labels looking to break out in the fast growing field of R&B. In mid-March of 1953, their next single, "I Wanna Know," made a huge impact and climbed to number three.
In June 1953, The Du Droppers released the follow-up to their RCA smash, and "I Found Out (What You Do When You Go Round There)" climbed to number three on the pop charts. Soon they were embarking on a late-summer tour of one-nighters through the South with the Joe Morris Blues Cavalcade. Subsequent singles, however, failed to generate much new interest in the group. In November, RCA paired the group with pop music singer Sunny Gale for a (now highly collectable) single, "Mama's Gone Goodbye." In 1954, The Du Droppers began recording for a new RCA subsidiary, Groove Records, which was meant to be strictly for R&B acts signed to the major label. Unfortunately, they failed to improve upon their track record and subsequent Groove singles saw them slipping from the charts.
In early 1955, Groove attempted to persuade Ravens' vocalist Joe Van Loan to join the group and help shake things up, but he was already under a personal service contract with Herald Records; while this was being sorted out, Charlie Hughes was brought in to sing lead on recordings only, though he wasn't allowed to perform with the group. Groove released another single and an EP, but The Du Droppers were unraveling even as it happened. In August, the label issued one last single, but soon thereafter, Junior Ginyard retreated back to gospel music, joining the Golden Gate Quartet, so the others decided to call it a day.