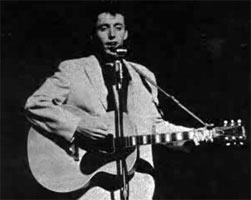 Rockabilly legend Mac Curtis was born in Fort Worth, TX, on January 16, 1939. He grew up with his grandparents and started playing the guitar in 1951 at the age of 12. A neighboring farmer taught him how to use it, and soon he was entering local talent contests. After winning 15 dollars in a contest, he realized that he not only got the price of the guitar back but also made five extra dollars. He then knew he could make a living off his talents, and after moving to Weatherford, TX, in 1954, he decided to play music with his schoolmates Jim Galbraith and Ken Galbraith. They were enamored with artists like Big Joe Turner, Chuck Berry, and Little Richard, wanting to create a similar sound in their group. The band began playing for their peers, even causing a minor controversy when they were pulled from a stage for lewd and suggestive gyrations. The student council intervened and the band began to play around for money. In 1955, they signed a contract with King Records, and in 1956 recorded their first single, "If I Had Me a Woman." Successive singles caught the attention of New York DJ Alan Freed, who booked Mac and his band on his 1956 Christmas show, giving them an exposure they had never experienced before. Curtis moved back to Weatherford by 1957 to finish high school. He became a radio DJ in his spare time, until he joined the military at the end of the year. He became a DJ in Seoul, Korea, and started a country band that would play for the troops. Curtis returned from duty in 1960 to see a very different music scene waiting for him. He decided to become a full-time DJ, working around the south and occasionally releasing albums. By 1971, he was learning about the popularity of rockabilly in Europe at the time. He started recording songs with Ray Campi, who shared his passion for country and rockabilly. The new Rollin Rock label started in Europe, sparking a rockabilly revival that included albums by both Campi and Curtis. This success allowed the artists to form a new, successful career overseas where their brand of music was more appreciated. Curtis continued to work this scene through the '80s and '90s, enlisted record companies to re-release his older singles, and managed to become a member of the Rockabilly Hall of Fame. Mac Curtis died September 16, 2013.