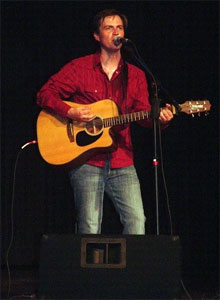 With his rich baritone vocal style, singer/songwriter Chris Cummings emerged during the late 1990s as a performer firmly in the mold of contemporary country's New Traditionalist movement. A native of Norton, New Brunswick, he made his public singing debut at the age of five, and was a local sensation throughout his childhood years. At 14, Cummings self-released a cassette which made its way to the Nashville offices of Warner/Reprise president Jim Ed Norman, who felt the young singer showed enormous potential; the same tape also caught the ear of California businessman Peter Leggett, who offered the teen a summer residency performing at the Pasadena club the Western Connection. With Leggett's assistance, Cummings recorded a new and improved demo; it too landed on Norman's desk, and finally the label head contacted the young singer, who was called out of a high school math class to accept the phone call from Reprise's Nashville offices. Still, Norman believed Cummings required more woodshedding before issuing his debut LP, and so he spent the next five years in Nashville honing his skills as a performer and songwriter. His self-titled debut LP was first issued in his native Canada in 1996, where it launched the hit singles "Sure Enough" and "I Waited; " Chris Cummings was finally released in the U.S. in early 1998.