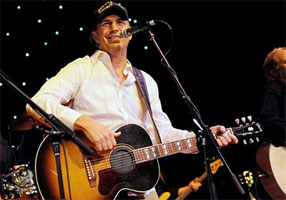 Kevin Costner is best known as an actor, director, and producer, and he has been involved in many movies, including The Bodyguard, Field of Dreams, Dances with Wolves, The Untouchables, and Silverado, but he has always been close to music, learning guitar and piano as a kid and singing in church choirs and school productions. He began performing as a musician before his movie career took off, sparked by meeting John Coinman in Los Angeles during an acting workshop. The two began playing and writing music together, forming the band Roving Boy with mutual friend Blair Forward. Roving Boy had some modest success, releasing an album, Simple Truth, and even scoring a number one single in Japan, but as Costner's film career took off, there wasn't a lot of time for music and the group grew more inactive, although the three friends would still get together to play and write behind the scenes on occasion, and now and then would hit the stage for a quick gig. One such performance in 2005 made Costner realize how good playing music felt, and he began to find more time to spend with the band. Adding Teddy Morgan, Larry Cobb, and Park Chisolm to the lineup and changing the band name to Kevin Costner & Modern West, the group began working on an album, Untold Truths, which was released in 2008 by Universal South. Two years later, Costner & Modern West released Turn It On, which initially appeared only in Europe. From Where I Stand, a third record from Modern West, appeared in the fall of 2011; the following summer, the group provided the soundtrack for Costner's History Channel mini-series Famous For Killing Each Other: Music From and Inspired By Hatfields & McCoys.