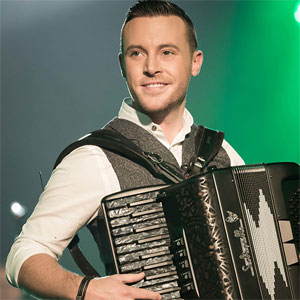 Country Irish star Nathan Carter was originally born in Liverpool in 1990 to Irish parents, but at age 18, he decided to make the move to his parents' home country. With an upbringing filled with music -- at age four he could play the accordion and at age ten he won the All-Ireland Title for Traditional Singing -- Carter would naturally gravitate toward the industry. His debut album, Starting Out, appeared in 2007, with the record's mix of country and Celtic influences helping revive the country and Irish genres in Ireland and England.
Becoming a firm favorite in Ireland, Carter released his sophomore album, The Way That You Love Me, in 2010; Time of My Life arrived the following year. In 2012, with the release of his fourth album, Wagon Wheel, Carter's career really took off. Peaking at number six on the Irish album charts, the record cemented his position as the leader of the new country and Irish scenes. 2013's Where I Wanna Be reached the top spot of the Irish album chart, and two years later, his seventh effort, Beautiful Life, did the same, and he reached the U.K. album chart for the first time. With a U.K. tour booked for that year, Carter continued to perform, wowing crowds in both the U.K. and Ireland.
Following this success, he released his eighth studio album, Stayin' Up All Night, in 2016, again peaking at the top of the Irish album chart; the set also fared well on the U.K. albums chart, and entered the Top 40. He returned the following year with his ninth studio LP, 2017's Livin' the Dream. Ever prolific, Carter continued his trend of an album a year with 2018's Born for the Road and 2019's Irish Heartland, before delivering his first best-of album, Anniversary Collection: The Best of the First 10 Years, in 2020.