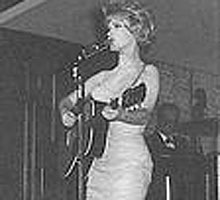 Jo Ann Campbell occupies a special niche in rock & roll. For starters, she wrote songs, and they were good enough to get released as singles, not buried on her albums. Her most successful records were clearly in a mainstream pop music vein, anticipating the work of teen girl pop singers such as Shelley Fabares, but she could also rock out like Wanda Jackson. A surprising number of her recordings were rough and tough, their obvious "cute" quotient balanced by Campbell's occasional raspy-throated delivery, which betrayed lust, or at least a healthy female libido in need of stroking. And the song that remains the best known today, "Mama, Can I Go Out?" (which never charted but was featured in Alan Freed's jukebox movie Go Johnny Go), is a great tribute to healthy female interest in the opposite sex — which, as we know, was at least half of what rock & roll was ultimately supposed to be about.
Campbell took music and dance lessons as a child, and was drum majorette at Fletcher High School in Jacksonville, Florida. At age 16, in 1955, she did a USO tour of Europe as a dancer — such tours didn't pay anything, but gave the participants a chance to travel and see the world while honing their skills as entertainers and performers, and this was precisely what Campbell did. When the tour was over, she felt ready for the big time and headed for New York, where she initially joined the Johnny Conrad Dancers. It was while in New York that she decided to try singing. She was fortunate enough to get featured on television's Colgate Comedy Hour and The Milton Berle Show, and later proved a huge success at the Apollo Theater in Harlem. In 1956, she was signed to the Eldorado label, which had her record an original song, "Come On Baby," as her debut single. This was followed by a more conventional pop standard, Campbell's cover of "I Can't Give You Anything But Love."
Neither single was a success, however, and by the end of 1957, Campbell had switched to George Goldner's Gone Records label, most famous as the company for which Frankie Lymon & the Teenagers recorded their hits. Campbell's records took on a more rocking beat at Gone, in keeping with the changes overtaking popular music — her 1958 singles included "Rock 'N Roll Love" backed with the far hotter B-side "You're Driving Me Mad," which was good enough to be featured on the 1980s underground compilation Hot Boppin' Girls, Volume 2. She cut one more original that year, "Wassa Matter With You Babe," but neither it nor its follow-up, "I'm Nobody's Baby," managed to chart. Campbell's singing ability was beyond question, however, and coupled with her extraordinary good looks — with her creamy complexion and blonde hair, and expressive eyes, she managed to look lustful and innocent at the same time — she rated a place on the bill at Alan Freed's Brooklyn Paramount Show, the biggest rock & roll and R&B stage show in the nation, and on Freed's package tour, and, in turn, got a featured spot in Freed's jukebox movie Go Johnny Go. There for millions of viewers to discover across the generations was Jo Ann Campbell, introduced by Alan Freed in the film as "our little blonde bombshell," alternately strutting and gliding across screen, pouting sweetly but with a lusty gleam in her eye to the strains of "Mama, Can I Go Out?" It was one of several high points in the movie, even if the single itself, on Gone Records, didn't chart as a result.
Campbell's subsequent single that year, the teen lament "I Ain't No Steady Date," did little better, despite a great beat and a cute spoken-word middle section. By 1960, she had moved to ABC Records, where she finally struck a modest hit with "A Kookie Little Paradise," a strange novelty-type song with a ridiculous Tarzan yell over the intro and outro. Her other records of this period continued to show an astonishing degree of maturity in dealing with sexuality, "Amateur Night" being the best example, her voice displaying innocence and lust all at once, this time backed by a tasteful female chorus. Campbell also recorded some slightly harder, bluesier pop, including the Duane Eddy tribute "Duane" (which she wrote) and the late 1958 B-side "Happy New Year Baby"; her voice had a power and a full, throaty rasp when she wanted it that could have made her a rival to Wanda Jackson, but mostly she treaded a very fine line between the hard and soft sides of music and her stage persona. Not all of her stuff was that good ("Bobby Bobby Bobby" would have made Shelley Fabares wince), but a lot of it was, and certain lusty numbers like "Beachcomber" deserve to be heard at least by cultural historians of the era.
Campbell charted two more singles: the sweet country-pop of "I'm the Girl from Wolverton Mountain" (which could've been a Dolly Parton song), which became her biggest hit, getting to number 38 in a seven-week run in the summer of 1962; and "Mother Please," which just brushed the pop charts at number 88 in a three-week run in the spring of 1963. By then her life and career were changing rapidly — she married Troy Seals, a country singer (and brother of Dan Seals), and the two began recording for Atlantic as a duo, Jo Ann and Troy, charting a couple of singles in 1964. Campbell retired in the mid-1960s, and most of her exposure since then has been from the movie Go Johnny Go in its periodic showings. Her reputation was sufficient, however, to get her Gone sides reissued on an LP (The Blonde Bombshell) of dubious legality in Europe (where they revere American pop and rock & roll of the 1950s) in the early 1980s, as well as justifying a legitimate reissue of her ABC sides on Murray Hill in the United States.