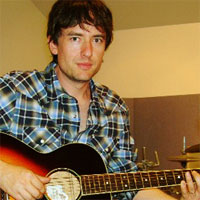 Paul Burch was born and raised in rural Maryland and Virginia and enjoyed the music scene of 1970s Washington, D.C., his family taking him to see such big names as Gram Parsons, Emmylou Harris, and John Prine. An occasional member of Lambchop, Nashville-based singer/songwriter Paul Burch made his solo debut in 1998 with Pan-American Flash; Wire to Wire followed later that same year, and Blue Notes was released in mid-2000. The following year, Last of My Kind, inspired by Tony Early's novel Jim, the Boy, arrived. In 2006, he released East to West, an album recorded in British Grove Studios in London and in Nashville and featuring Mark Knopfler and Ralph Stanley. In 2009 Burch and the WPA Ballclub (Jim Gray, Fats Kaplin, Dennis Crouch, Jen Gunderman, and Marty Lynds) released Still Your Man, an all-new collection of songs that were recorded in a converted warehouse on the outskirts of Nashville's "Music Row".