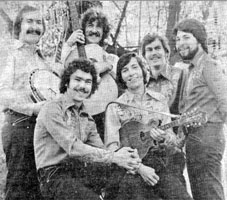 Its name taken from religious revival meetings — at which people covered their shelters with vegetation to keep the rain out during rousing meetings — Brush Arbor was founded in San Diego by brothers Jim (Vocals) and Joe Rice (guitar, mandolin) in 1971. After winning a talent show on KSON radio, the duo was invited to perform at a concert featuring Sonny James, Mel Tillis and Bill Anderson. Afterwards, they accepted both a contract to record for Capitol and an invitation to play on the Grand Ole Opry. Brush Arbor's eponymous debut album appeared in 1972, followed by Brush Arbor 2 the following year. After their cover of "Proud Mary" reached the Top 60, the duo became quite popular in Southern California and frequently played at tourist attractions such as Disneyland, Knott's Berry Farm, and Sea World. Brush Arbor appeared on Dean Martin's Music Country in 1973 and soon scored their biggest hit with the number-41 "Brush Arbor Meeting." They also garnered awards for ACM's Vocals Group of the Year and Touring Band of the Year. In 1977, they recorded Straight for Monument and had a minor hit with "Get Down Country Music," also playing on Hee Haw and the Celebration show in Canada. Jim and Joe continued touring extensively until 1979; after that, they performed occasionally for church concerts. In 1993, Brush Arbor recorded a new album, What Does It Take?, for Benson.