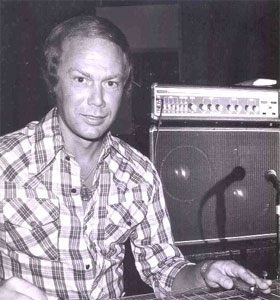 Pedal steel guitarist Tom Brumley remains best remembered for his six-year stint as a member of Buck Owens' famed backing group the Buckaroos -- his contribution to the Owens classic "Together Again" is widely celebrated as among the greatest pedal steel solos in country music history. Born in Powell, MO, in 1935, he was the son of gospel giant Albert E. Brumley, the composer behind such staples as "I'll Fly Away," "Turn Your Radio On," "I'll Meet You in the Morning," and "He Set Me Free" -- all six of the Brumley children possessed musical talent of their own, and when Al Jr. relocated to Bakersfield, CA, to join the cast of KERO-TV's daily country music showcase The Jimmy Thomason Show, Tom soon relocated west as well. Al Brumley, Jr. also cut a series of little-noticed singles for Capitol, hiring Tom to play pedal steel on a 1963 session -- Owens heard the resulting record and immediately extended Brumley an invitation to join the Buckaroos alongside guitarist Don Rich, bassist Doyle Holly, and drummer Willie Cantu. Brumley remained with Owens through 1969, and his stretch with the Buckaroos coincides with the creative and commercial zenith of the singer's career, a period that yielded smash hits including "Act Naturally" and "Tiger by the Tail" and effectively crystallized the fabled Bakersfield sound. After leaving the Buckaroos, Brumley signed on with Ricky Nelson's Stone Canyon Band, appearing on the singer's 1972 comeback hit "Garden Party" -- in the years to follow, he also guested on sessions headlined by everyone from Dwight Yoakam to Reba McEntire to Chris Isaak. In 1989, Brumley retired from touring to rejoin Al Jr. in Branson, MO, where together they appeared at the 76 Music Hall headlining the Brumley Family Music Show, which also included two of Tom's children. A member of both the Texas Steel Guitar Hall of Fame and the International Steel Guitar Hall of Fame, Brumley died February 3, 2009, in San Antonio, TX -- he was 73.